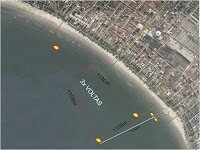 On the 40 women entered in the Maratona Aquática Internacional de Santos, nine 2008 10K Olympians are entered, including 3 of the top 5 swimmers in Beijing: Larisa Ilchenko, Angela Maurer and Brazil’s young Ana Marcela Cunha.

Of the 40 men in the field, there are seven Olympians and a whole lot of hungry, aggressive swimmers ready to make their mark in this London Olympics quadrennial.

The swimmers are expected to start the race on Sunday under sunny, hot and humid weather – 30°C – and may end the race around mid-day under thunderstorms and rain.

The race will be available on Santa Cecilia TV live online starting at 10:00 am Santos, Brazil time on Sunday morning. The men will start at 10 am and the women will start 10 minutes later. Click here and watch live by clicking on the Portuguese (“clique aqui e assista ao vivo”).

Enjoy watching the world’s fastest marathon open water swimmers live online. We will have our eyes out for Andreina Pinto of Venezuela, Chloe Sutton of the USA, Rachele Bruni and Martina Grimaldi of Italy, Linsy Heister of the Netherlands, Nadine Reichert of Germany, Anna Uvarova of Russia and Swann Oberson of Switzerland. On the men’s side, Allan Do Carmo of Brazil, Spyridon Gianniotis of Greece, Simone Ercoli and Luca Ferreti of Italy, Ivan Lopez of Mexico, Evgeny Drattsev of Russia, Chad Ho of South Africa and Fran Crippen of the USA will undoubtedly be making their push towards the end (see triangular course above).

But, as always, we can expect the unexpected in the wild, wild world of open water swimming.