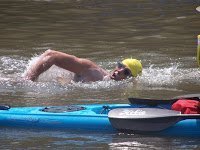 Bleacher Report used six different categories to judge its determination of the toughest sport in the world? Bleacher Report analyzed the toughest to play, toughest to compete, toughest on the body by giving a rating to the required speed, endurance, strength, agility, skill level and physicality of each sport. The six sports (out of a maximum of 10) were added together to give a final toughness rating for each sport.

The higher the rating, the tougher the sport. The final results:

Given his years of playing water polo, it is no wonder that when he combines his bottomless passion for marathon swimming with his background as a fearless water polo player, an individual like International Marathon Swimming Hall of Famer Ned Denison emerges out of the depths.