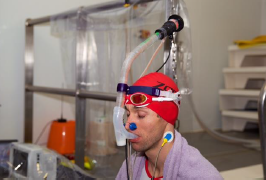 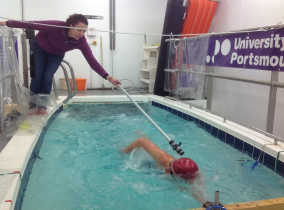 Courtesy of Doctors Jane Saycell, Mitch Lomax, Heather Massey, and Mike Tipton of the Department of Sport and Exercise Science, University of Portsmouth at the 2016 FINA Sports Medicine Congress.

A comprehensive study of swimmers’ physiological reactions and their own perceptions to swimming in water colder than 20°C was conducted by Dr. Jane Saycell, Dr. Mitch Lomax, Dr. Heather Massey, and Dr. Mike Tipton of the University of Portsmouth.

Their work quickly led to fundamental changes in FINA rules regarding water temperature and use of wetsuits that were enacted on January 1st 2017.

They explained what happens when the swimmers are immersed in cold water:

Cold receptor channels on free afferent nerve endings are activated by the cold. The afferent signal is detected in the hypothalamus leading to a release of noradrenaline (norepinephrine) as a neurotransmitter.

With cold shock, the athlete’s sympathetic nervous system is activated. Gasps are followed by hyperventilation and the heart rate increases while vasoconstriction leads to increased blood pressure. Ongoing responses includes an increased vasoconstriction that improves the insulation of the core and an increased metabolic heat production from shivering.

As the swimmer enters cold water, there is cold shock and heat loss from the body through conduction. Blood flow is maintained to the working muscle while insulation is provided only by subcutaneous fat. Muscles may cool before the core does which leads to the potential for swim failure. As the core cools, the athlete will eventually experience hypothermia. Even if the athlete exits the water, core cooling may continue for some time.

The researchers conducted three field studies at 9 open water swimming events in the UK and Canada where they monitored 228 swimmers before and after races. They compared a triathlon study with 12 lean, competitive triathletes who completed a simulated swim, transition and cycle in a laboratory over 5 different temperature and wetsuit conditions. They also tested 12 competitive swimmers who swam for 2 hours in water temperatures varying between 14-20°C.

The researchers measured deep body temperatures with a GI pill, body mass index, skinfolds, height, wetsuit use, type and thickness, and acclimatization, experience and ability that were assessed via a questionnaire. The water temperature was measured at three different depths in the middle of the course, wind speed, WBGT and current flow.

The 2-hour non-wetsuit marathon swim study was conducted in water temperatures at 14°C, 16°C, 18°C and 20°C. The researchers measured the swimmers’ deep body temperature during and after the swims, perceptions of the cold, various physiological parameters like heart rate and oxygen uptake, and swim efficiency.

The researchers found that 226 of the 228 swimmers completed their swim, but 14 swimmers experienced hypothermia (defined at deep body temperature less than 35°C during or after the swim. 199 swimmers showed their lowest deep body temperature approximately 30 minutes post-swim. They found that there was no influence due to ambient temperature and, not surprisingly, the thinner swimmers were more likely to cool and the non-wetsuit swimmers cooled more than the wetsuited swimmers. They observed that the elite swimmers were significantly leaner than the other swimmers.

Their conclusions were as follows:

Q1. What is a physiologically safe lower water temperature for elite endurance swimming?
A1. For lean, elite level swimmers, 16°C and 18°C will cause hypothermia in under two hours. For a shorter swim, 16°C is possible. Swimmers are likely to be coolest some time after existing the water.

Q2. What is the relationship between low water temperature and duration of endurance swimming?
A2. Swimmers follow a linear pattern of cooling: the longer the swim, the greater the fall in deep body temperature.

Q3. What are the individual athlete parameters that affect ability to cope with cold environmental factors (e.g., sex, age, body fat percentage, experience)?
A3. Leaner swimmers are most likely to cool, regardless of acclimatization or other factors.

Q4. Are athletes able to reliably assess comfort and perceived stress that mirrors physiological responses?
A4. No, swimmers have an unreliable perception of cold stress.

Q5. What is the effect of ambient temperature and wind chill on the comfort and physiological demands of the athletes?
A5. Ambient conditions have no influence on the deep body temperature of swimmers in the water.

Q6. What is the physiological benefit and protection offered by a competitive swimming wetsuit?
A6. Wetsuits provide some protection against cooling. Further studies would be required to say exactly how much for any given water temperature and time in the water.

The researchers recommended the following:

* In order to reduce the risk from cold shock, athletes should have exposure to the water before swimming.
* Safety personnel should understand the signs of swim failure.
* For marathon swims, a minimum water temperature of 18°C-20°C should be set for long distance elite non-wetsuit swimming. This would be a compromise between safety and the ability to run events.
* Regarding aftercare, swimmers should be supervised after races and offered advice and facilities for safe rewarming.

As a result, FINA enacted new rules about its allowable competition swimwear on January 1st 2017. The FINA Bureau changed its rules on swimwear and allows use of wetsuits and neoprene in its competitions below certain water temperature thresholds. FINA’s rules include the following:

BL 8.5 From January 1, 2017, for open water swimming competitions in water with temperature below 20°C, men and women may use either swimsuits (BL 8.4) or wetsuits. When the water temperature is below 18°C, the use of wetsuits is compulsory. For the purpose of these rules, wetsuits are swimsuits made of material providing thermal insulation. Wetsuits for both men and women shall completely cover torso, back, shoulders and knees. They shall not extend beyond the neck, wrists and ankles.

The new rules were instituted due to concerns that the FINA Bureau has regarding conducting events in low temperatures (defined at 20°C or below). “FINA…will take all necessary measures to ensure the maximum possible levels of security and safety for all athletes in [its] races,” stated FINA.