The Water World Is Smaller Than We Think 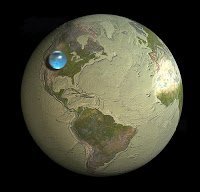 But the water on our planet is much less than we think.

The illustration on left, created by Jack Cook, a graphics designer at the Woods Hole Oceanographic Institution, helps us understand how precious and how little water actually is on our planet.

Cook‘s representation shows a remarkable comparison of the size of the Earth and all of the fresh water, salt water, ground water, water vapor, water inside our bodies and frozen water in the ice caps that is represented by a single drop.

The total amount of water would make a ball 860 miles (1,385 km) in diameter – or as Forrest Nelson points out “a relay team would have a 2,700-mile challenge to circumnavigate the aqueous sphere or a swim from one end of the Mediterranean to the other – Gibraltar to Bosporus or a swim between Seattle and Honolulu or a two-way swim across the Tasman Sea between Sydney and Auckland and back or a swim along the coast of India from the Pakistan to Bangladesh border or a swim from Scotland to Nova Scotia across the Atlantic“.

Nelson puts this all into perspective: Ben Lecomte intends to swim two times that distance (5,400 miles) across the Pacific Ocean on his Longest Swim.