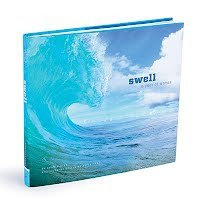 Evan Slater and Peter Taras co-authored Swell: A Year Of Waves, a magnificent book of beautiful photographs and engaging essays about giant ocean swells that start in different places around the world.

These swells are the very forces that Dan Martin will feel with regularity as he strokes and struggles his way across the Atlantic Ocean.

Who knows what he will face along the surface of the ocean thousands of miles from the closest shore? His only umbilical cord to safety is his relatively tiny escort boat.

Not even marine biologists, meteorologists, boaters and ship captains cannot possibly known what it feels like at the basic human level as the ocean swells and all the other forces of the dynamic expanse of sea will impact Martin and his crew.

Only Ben Lecomte and Simon Holliday have an idea of what Martin will face.