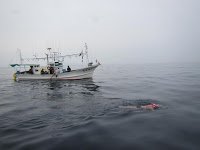 “Even monkeys fall from trees,” so says the old Japanese proverb (猿も木から落ちる).

So despite Stephen Redmond‘s many successes in the North Channel, Catalina Channel, Cook Strait, Fastnet Rock, Strait of Gibraltar, Molokai Channel and English Channel, his track record is not perfect.

But that is the nature of open water swimming and the inherent risk that the most audacious marathon swimmers accept.

There is no defeat in Redmond; his warm-up swim of 4 hours in the Tsugaru Channel 2 days ago was merely part of the Oceans Seven drama. In the most foreign waterway imaginable for the Irish swimmer, his ability to remain positive and try again is the foundation for his success.

But the sooner he begins, the better as the wind is forecasted to increase again. His window of opportunity is tight and time is ticking until the winds whip up another fury in northern Japan. Experienced fishermen and swimmers in the Tsugaru Channel know that it is not the conditions of the water at the start that matter; rather, it is the conditions in the middle of the rip (at the heart in mid-channel) that can make or break a swim.

But his Japanese team, the volunteers on both shores, and the local media are waxing philosophical about Redmond’s tackling the toughest channel in the Japanese archipelago. 七転び八起き the Japanese say (stumbling seven times but recovering eight) falls right in line with Redmond’s Oceans Seven attempt today.

Follow him here where like the hawk that hides its talons (能ある鷹爪隠す), Redmond will showcase his talents tonight.