Way Back When In Tasmania

Steven Munatones 12/24/2018 Open Water Swimming No Comment
Photo of Daniel Curtis in the Derwent River courtesy of Kim Eiszele. History courtesy of Christopher Guesdon, , Tasmania, Australia. There have been open water swimming events of various types and distances on the Derwent River since 1803 when Hobart, the capital and most populous city of the Australian island state of Tasmania, was settled. Founded in 1804 as a penal colony, Hobart is Australia’s second oldest capital city after Sydney. The city is located in the state’s southeast on the estuary of the Derwent River, making it the most southern of Australia’s capital cities and its harbour forms the second-deepest natural port in the world. Christopher Guesdon of the International Marathon Swimming Hall of Fame explains, “These swims have been conducted by many swim clubs and individual organizations, namely regatta associations. In Tasmania, Guesdon pioneered swimming marathons in 1961. He explains, “The Australian Long-Distance Swimming Federation was formed in 1973 in Hobart to facilitate recognition of the new sport as this was not forthcoming from the pool orientated national body. The Foundation members and subsequent office bearers were myself as President, Deputy President Dick Campion, Secretary Sue Guesdon, and John Koorey as an Executive Member. The Foundation changed its name in 1980 to the Australian Marathon Swimming Federation when John Koorey became the President and the Australian Championships moved to Sydney, New South Wales. The Australian Marathon Swimming Federation organized the national open water swimming championships until FINA and therefore Australian Swimming Inc. took over open water swimming in 1986. The first Australian Swimming Inc. Open Water Swimming Committee was set up in 1988 when I then became the Secretary of Australian Swimming’s National Open Water Swimming Committee and Koorey and Campion moved across as committee members of that national body. From this beginning, the movement of open water swimming was grabbing a foothold across the country. Health, fitness and elite competition programs in open water and rather than swimming pools, were flourishing and here to stay. In 2018, there were as many individuals swimming in hundreds of separate events in Australia in open water competitions as there were members in pool swimming clubs. These numbers didn’t include those plunging into the open water on their own as an activity for health and fitness reasons.” In subsequent years, many other nations and individual hallmark events followed the Australian lead and national and world bodies were formed. 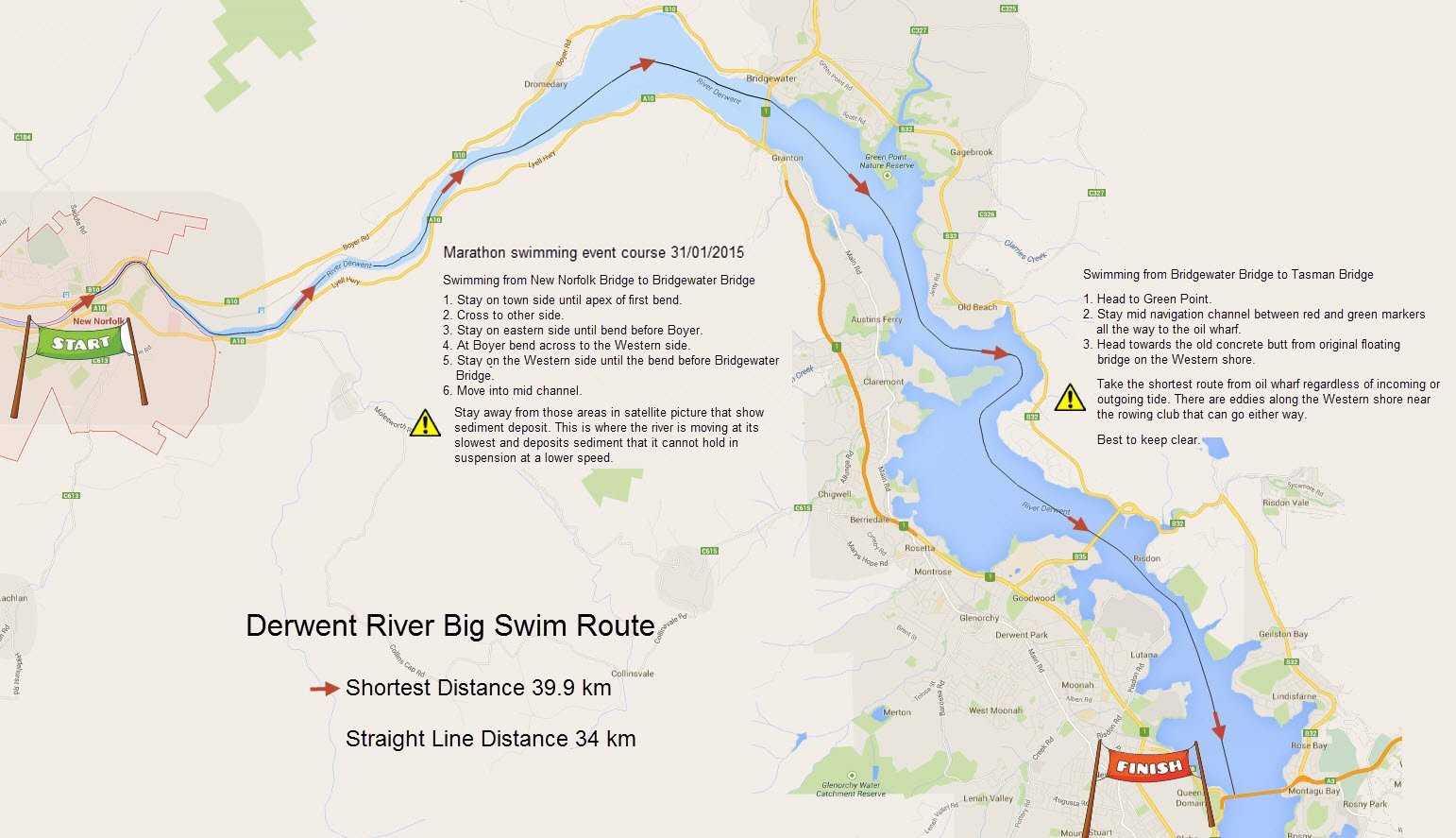 For example, the Big Swim Derwent River Marathon was a 34 km swim from the New Norfolk Bridge to Tasman Bridge in Hobart. Guesdon was the first to challenge the course on Australia Day 1973. He explains the history of the event, “The Big Swim Derwent River in Hobart is considered one of the most difficult marathons to complete. The varying weather patterns can be extreme. Southerly weather brings winds from Antarctica in the great Southern Ocean via Storm Bay. The Derwent is a tidal river with the fresh water from the source and salt water stretching upriver for 20 km. The late, legendary Des Renford from Maroubra Surf Lifesaving Swim Club was the first to complete the distance on January 25th 1975 in 10 hours 54 minutes. Dick Campion set the fastest time on January 26th 1976 in 9 hours 19 minutes. Jenny Anderson was the fastest woman in 9 hours 44 minutes set on January 26th 1976 and the first non-Australian was Daniel Curtis in 15 hours 57 minutes on January 31st 2015. Des Renford, Dick Campion and I are all Honorees inducted into the International Marathon Swimming Hall of Fame. Jenny Anderson finished second in the 1975 ILDSF World Championships [but] 39 years had elapsed when Daniel Curtis of the USA became the first non-Australia to complete the swim on January 31st 2015 in 15 hours 57 minutes. Relay swimmers from Park Beach Surf Lifesaving Club, Geoff Marsh, Mike Watkins, Stephen Godfrey, Don Marsh, Gary Everingham and Don Hallett swam the 34 km in 6 x 1 hour relay in 1974 in 7 hours 43 minutes. The Park Beach Surf Lifesaving team used the English Channel relay model of the time of 6×1 hour recurring relay.” The long swims on the River Derwent in New Norfolk are held on dates around or on Australia Day January 26th. Guesdon continues to explain the history in the area, “The history on the Derwent swims is not restricted to one course and a few swimmers.  There are numerous courses swum on this great river Derwent, across, up and down the river. There are three bridges used as starting and finishing lines.  Since 1973 when the Australian Long-Distance Swimming Federation was formed, 46 swimmers have competed in the various races in the Derwent at marathon distance. The body was run by volunteers who in fact underwrote the sanctioned events both financially and with manpower. The organizers provided accommodation, boats, watercraft and personnel.” A number of swims have commenced and continue on the Derwent River, but most are swims across the river of about 2 km – 5 km. One of which is the 1.5 km Trans Derwent Royal Hobart Regatta Race which is the second oldest continuously run race in Australia [see videos above]. Other distances across the Derwent River are up to 5 km, but other swims have commenced in Hobart and finished in Kingston or been conducted in the opposite direction. The 15 km course from Kingston Beach to Constitution Dock Hobart was used as the Australian Championship race. Guesdon explained, “Top Australian and New Zealand competitors included Philip Rush, the record holder for the fastest triple crossing of the English Channel, Australia’s John Koorey, the first Australian man to cross the English Channel, and Graham Bruce, an English Channel swimmer and a member of the 1983-1984 and 1996 Australian National Open Water Swimming teams.  I originally swam the 15 km distance in 1981, the first person to complete the swim on that course swam from Hobart to Kingston. Then the race course was established for most of the swims between those towns.” Videos courtesy of Royal Hobart Regatta. Copyright © 2008 – 2018 by World Open Water Swimming Association