Wayne Snellgrove Being Passionate And Giving Back 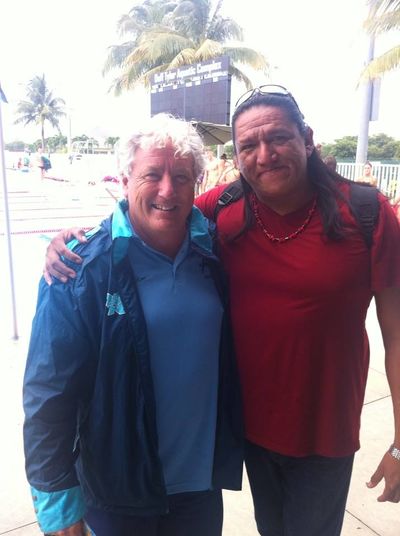 Wayne Snellgrove Being Passionate And Giving Back

Wayne William Snellgrove has a knack to give back to those of his heritage and sport.

Snellgrove whose birth name was Dwayne Ivan Smoke and whose nickname is the Greatest Native American Swimmer was born in Canada and was a Sixties Scoop child.

After being adopted by American parents, he went on the swim at the Peddie School and La Salle University in America.

As a nationally ranked swimmer, Snellgrove was a member of a national high school record-setting relay and was one of the fastest high school butterfly swimmers in America in the early 1990s. By 1992, broke 2 YMCA national records and won YMCA two national long course swimming titles.

In 1993, he started ocean swimming and working as a lifeguard for the Atlantic City Beach Patrol. But wheels came off his upward trajectory in the pool and open water when he moved to South Florida. In a strange twist of events, he lived homeless on the beach while training at the Ft.Lauderdale’s International Swimming Hall of Fame pool.

Decades passed by as Snellgrove did a wide variety of activities, but he always kept the open water close to heart.

His dedication to the sport and passion for swimming is finally being acknowledged. “I have been selected to be a swim coach for Team Saskatchewan at next summer’s North American Indigenous Games (NAIG) in Toronto.”

This selection is uniquely special. “It is truly special becoming a coach from the very same ancestral land where I was stolen from 45 years ago – and now I am returning to help our native youth.”