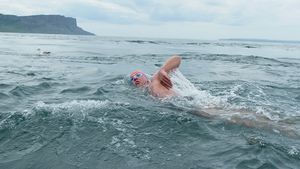 “It will be the first time that the Conference will be held in Europe,” says Steven Munatones. “In the hotbed of open water, the Irish have an unsurpassed passion for the sport.

The conference will address topics of environmental, scientific, and sporting relevance to the open water swimming community as well as reports and presentations from well-known and not-so-well-known athletes at the Rochestown Park Hotel in Cork.

Wayne Soutter, a pioneer in the North Channel, will be one of the featured speakers. He will present a behind-the-scene view on planning a new swim. His swim was one of the boldest and audacious on record: a swim from Mull of Kintyre in Scotland to Ballycastle in Northern Ireland.

As described by host Oswald Schmidt, “For most channel swims, all you need to worry about are two things: (1) Do enough training, and (2) phone your skipper each evening to find out if you are going the next day. But what if the swim you want to do has never been done before?

And what if the closest boat and captain with experience is a days boat ride away, there are no previous swim routes to follow, the currents are the strongest in the world, and you only understand every fifth word anyone in that area says. Where do you start? This is what Wayne is going to present
.”

“I started by phoning a radio station,” explains Soutter. Here the rest of his story and adventure at the Global Open Water Swimming Conference Cork 2013 in Ireland.