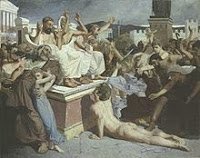 One extremely liberal view in the open water swimming world is to define marathon swimming as a swim which pushes the swimmer further than what they initially thought possible. That is, while a marathon swim is defined differently by many different organizations, a marathon swim can also be self-defined by and for each individual.

When Pheidippides, the original marathon runner, ran 40 km (25 miles) from Marathon* to Athens in order to announce the Greek victory over Persia in the Battle of Marathon (490 BC), he reportedly said, “Νενικήκαμεν” (or Nenikékamen, ‘We have won’).

In this unconventional definition of marathon swimming, the beauty of open water swimming is that everyone can feel like a winner upon reaching the shore – no matter what their distance, time, placing, venue or age division.

While a marathon swim distance can be 72 miles for Penny Palfrey in Hawaii, 21 miles for Petar Stoychev across the English Channel or 25 km for Maarten van der Weijden in a FINA world championship, it can also be 5 km for a masters swimmer or 1 mile for a young age-group swimmer.

The sport of open water swimming is vast and expansive. It includes everything from Polar Bear Swims, lifeguard competitions, wild swimming, and triathlon swims to masters swims in lakes, sanctioned international pro races in oceans and channel swimming. The Daily News of Open Water Swimming attempts to cover every aspect of the sport because there is truly a distance, venue or temperature for everyone.

* Marathon, Greece – where the first world open water swimming championships will be held for Special Olympics athletes at the 2011 World Games.