We Know Richard Weinberger, But Who Is Eric Hedlin? 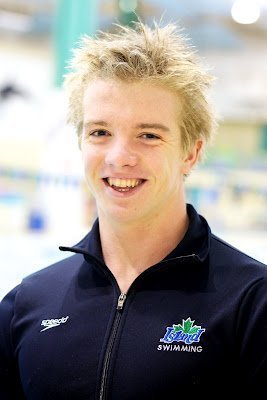 Richard Weinberger emerged as another one of the Canadian long distance freestyle swimming stars over the past few years. Along with Ryan Cochrane who captured a silver in the 1500m pool event, Weinburger was the Olympic 10K Marathon Swim bronze medalist as he hung with Ous Mellouli and Thomas Lurz.

And like other Canadian greats like Jacques Amyot, Robert Cossette, Régent Lacoursière, Cliff Lumsdon, Greg Steppel, and George Young, the global open water swimming elite may have to deal with another tough, young Canadian emerging from the winter cold of the Great White North.

In Victoria at the Swimming Canada World Championships Trials, the 19-year-old Eric Hedlin from Island Swimming in Victoria, nearly qualified for the 1500m event at the FINA World Swimming Championships with a 15:03.6 in the 1500m freestyle behind 2-time Olympic medalist Cochrane and Will Brothers.

That kind of stamina and speed will serve him well as he attempts to qualify – with Weinberger – for the world championships in the 10 km marathon swim in Barcelona. If his trajectory is another like Weinberger’s emergence, then Canada has a lot to look forward to over this next Olympic quadrennial.