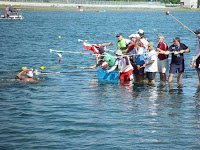 In a fascinating study performed by on weight changes among triathletes at the Ironman World Championships in Kona, Hawaii, Dr. Robert Sallis, a sports medicine doctor at the Fontana Medical Center, and Claremont McKenna College’s team doctor Glen Moore concluded that men and women of various age groups have different problems with fluid balance.

Their data compared the pre- and post-race weights of the 229 athletes who were seen in the medical tent before and after the 2008 Ironman, a race where high heat and humidity lead to frequent problems with fluid and electrolyte balance.

The details of their study were presented at the 2010 American College of Sports Medicine in Baltimore, Maryland.

While monitoring the percent weight change among men and women in the English Channel and Catalina Channel would be an interesting comparison to Dr. Sallis and Dr. Moore‘s study of triathletes at the Ironman, a similar test to monitor weight gain or loss in extreme environmental conditions (e.g., hot and humid) would probably be one of the marathon swims in warm water, like the Swim Around Key West in Florida, a Molokai Channel swim in Hawaii or the 18K Fiji Swims or one of the longer FINA Open Water Swimming Grand Prix events held in summer.

Photo by Dr. Jim Miller at the 2005 World Swimming Championships in Montreal, Canada.