Wendy Trehiou Honored Among Her Peers And Public 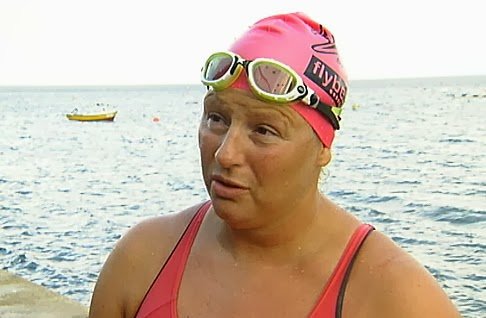 When we had the pleasure to meet Wendy Trehiou at the Global Open Water Swimming Conference in Ireland, the breast cancer survivor was even more impressive than we imagined.

We frequently hear about epic sporting endeavors and extraordinary athletes. We watch them on television and we read about them online. And sometimes we even occasionally have the opportunity to observe them first-hand.

But Trehiou and her 39 hour 9 minute crossing 2-way crossing of the English Channel were somehow different. She was special.

Trehiou has a wonderfully broad smile with a laugh and love of life that is so contagious. But underneath that veneer of personality, there is a depth of conviction so empowering and so inspirational. It is clear that spirit is what helped drive her back to health after her bout with breast cancer.

And her peers in the marathon swimming world recognize greatness. Her double crossing was chosen as the 2013 Female Solo Swim of the Year by the Marathon Swimmers Forum (see the finalists here).

But her day-and-half non-stop swim was not only recognized by her peers. Accolades came pouring in this year. Trehiou was also awarded the 2013 Churchill Award for Courage in recognition for her August 20th-21st swim. The Churchill Award for Courage was established by an Act of the States of Jersey in 1965 for acts of bravery performed by members of the uniformed services or by members of the public.

Her track record of marathon swimming success is envious and evident: she has complete 2 other English Channel crossings, a Jersey France Solo and a Round Jersey Solo, but it was this year’s memorable 39 hour 9 minute crossing that she commemorated with a classic tattoo on her foot (see photo below).

As a resident of Jersey, the English Channel literally envelopes her geographically. As a member of the local swimming community, the English Channel engages her emotionally. But her road to a two-way crossing was a long time in the making. “I did my first Channel swim before being diagnosed with cancer – in 2006 in 13 hours 36 minutes.” 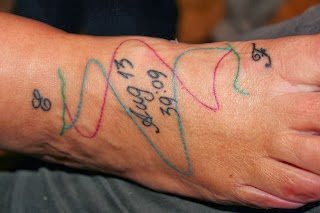 And so she was off and swimming. She completed a Round Jersey solo swim in 2007 in 10 hours 51 minutes. Then she completed a Jersey to France solo in 2008 in 9 hours 9 minutes giving her three marathon swims in three years. But then time passed and she faced the biggest obstacle of her life. “I was diagnosed on May 5th 2011 and finished my treatment on December 13th.” Not wanting to waste any time and get back into the swing of things, Trehiou was given the green light by her doctor to train for an English Channel swim on January 16th 2012.

“I completed my second solo on June 26th, a little more than a year after I was first diagnosed.”

Her WOWSA Award nomination reads, “Greatness in the English Channel is not reserved for the fastest or mightiest. In the Channel, greatest is destined for anyone of any age or ability who trains and struggles to get from one shore to the other. Stamina and strength; courage and commitment; tenacity and toughness: these are the traits and characteristics that are demonstrated by English Channel swimmers. Wendy Trehiou showcased her strengths in a two-way 39 hour 9 minute effort that drew raves from the channel swimming community, especially since Trehiou is a cancer survivor and she had to abort a two-way attempt only weeks before. For her love of life, her commitment to finishing a most difficult challenge, for instilling inspiration throughout her native Jersey and far beyond, the 2-way channel swim of Wendy Trehiou is a worthy nominee for the 2013 World Open Water Swimming Performance of the Year.“

Her fellow 2013 World Open Water Swimming Performance of the Year nominees include: