Were Records Made To Be Broken (In The Open Water)? 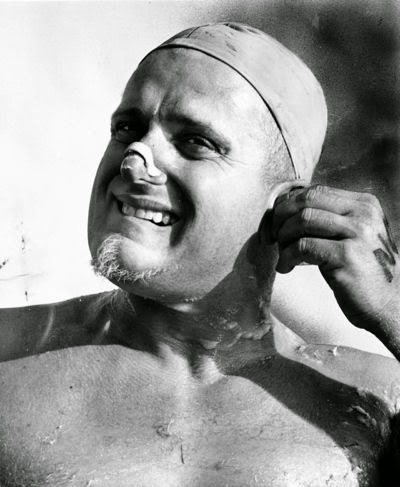 There were few people cheering more emphatically for the success of Craig Lenning in the Farallon Islands than the venerable Ted Erikson. Erikson knows very well first-hand what Lenning faced and had to overcome.

Erikson completed the first swim from the Farallon Islands to the Golden Gate Bridge at the mouth of the San Francisco Bay in September 1967. But his eventual success was preceded by two valiant failures, one of which he was declared dead before he came back to life, back in 1966. So the Erikson has a soft spot in his heart for the young 34-year-old Lenning who followed in his wake 47 years later.

After Lenning’s success of 15 hours 47 minutes, Erikson congratulated Lenning and his support team of captain Vito Bialla, navigator David Holscher, co-captain Patrick Horn, crew chief Jamie Patrick, and observer Evan Morrison. But he also noted that his 1967 record to the Golden Gate Bridge, not the mainland at Muir Beach [where Lenning walked ashore] at 3 miles shorter, still holds. “If it holds to 2017, it will be a half-century record and I’ll be 89 years old then,” observed Erikson.

The waterway between the desolate Farallon Islands and the Golden Gate Bridge is governed by the Farallon Islands Swimming Association. But Erikson’s observations bring up several interesting issues regarding records:

1. If the acknowledged waterway is from Point A (e.g., Farallon Islands) to Point B (Golden Gate Bridge) and a swimmer swims outside those 2 points and lands in a different location (e.g., Muir Beach), how is this swim viewed?
2. If the acknowledged waterway is from Point A to Point B, but the first successful swim in the waterway takes a different route (e.g., Lieutenant Colonel Stewart Evans in August 1967), how is that swim handled in the record books?
3. If the acknowledged waterway is from Point A to Point B, but two of the acknowledged crossings fall outside these parameters (e.g., Lieutenant Colonel Evans from the Farallon Islands to Bolinas and Lenning from the Farallon Islands to Muir Beach), how are those swims handled in the record books?
4. Does each swimmer hold a record because they are taking three different course (a la the two different North Channel courses that are acknowledged by the Irish Long Distance Swimming Association as in the North Channel Swim Route and the Dál Riata Channel Swim – see article on Where Is Precisely The North Channel)?
5. Or does the fastest person (i.e., Lieutenant Colonel Evans) hold the record? Or does the person who swam the furthest hold the record (i.e., Erikson)?
6. Who or what entity keeps track of these records? Is it solely the responsibility of the Farallon Islands Swimming Association – or a larger, more global organizations like the Marathon Swimmers Federation or the Guinness Book of World Records? Who or what entity SHOULD keep track of these records?
7. Who or what entity is responsible for verifying the record? Is it solely the responsibility of the local governing body – or do or should the local governing bodies collaborate with larger, more global organizations like Marathon Swimmers Federation or the Guinness Book of World Records?
8. If there is a debate over a record, who does or should adjudicate the decision? Should the Marathon Swimmers Federation be the ultimate adjudicator?
9. If the Marathon Swimmers Federation is the ultimate adjudicator of records (and rules), will it serve as the archive of record of marathon swims?
10. What is the definition of marathon swimming? If the definition is 10 km in distance, does this include current-assisted 10 km swims (e.g., in a river)? Should FINA‘s definition of 10 km be used?
11. Should records be established for swims of various distances, ages, genders, and venues (e.g., salt water, fresh water, lakes, bays, oceans, rivers)?
12. Should records be established for open water swims (i.e., those swims less than the to-be-established marathon swimming distance)?
13. Should records be established for ultra-swims (e.g., those swims greater than 24 hours in duration)?
14. Does every local waterway ultimately have only one governing body? Or is it acceptable to have two different governing bodies like the English Channel does with the Channel Swimming Association and Channel Swimming & Piloting Federation? In the case of two separate organizations for the same waterway, can or should there be two separate record lists or should the record list be consolidated?
15. Who or what entity can establish a governing body? What is required? What is optimal for an individual or a group to establish a governing body? Must it be a non-profit organization?
16. Who or what entity gave the rights to each association to be in charge of its waterway?* 17. Can a single individual create his or her own governing body specifically for their own swims (e.g., as Walter Poenisch‘s International Federation of Professional Ocean Swimmers and Divers)?
18. If a single individual creates his or her own governing body for their swims and they are successful, must other swimmers who attempt swims after them follow their rules? Or can the rules of subsequent swims be different (either less stringent or more stringent)?
19. What is an ungoverned body of water now that the Marathon Swimmers Federation has been established?
20. Must all observer reports be written and submitted in English? Or can reports be written and archived in the native language of the swimmer and his/her crew?

While some swimmers will be focused on and rightfully proud of these record-setting swims, we are hopeful that the global community will continue to celebrate all open water swims and will ultimately decide some or all of the questions raised above. These are not necessarily easy questions to answers and the debate may be lengthy, nuanced and very interesting to hear.