Four top open water swim races in the beautiful Caribbean Sea have formed the West Indies Bluewater Swim Series for 2011. This new series will prove to be a great catalyst for both local and international athletes to come together in the beautifully warm and colorful oceans waters throughout the Caribbean region.  These races span and reflect the diversity of the West Indian islands.
The series spans from the north with the Turks & Caicos (just below the Bahamas) to the west with the Cayman Islands to the south with Trinidad (just above Venezuela) and Nevis in the middle.  The diversity and beauty of this new island series is unparalleled – and a welcomed precursor to the future.
As the popularity and participation in open water swim racing continues to grow worldwide, the West Indies Swim Series aims to grow with it.  The series will undoubtedly foster the excitement, inclusiveness, and goodwill that are indigenous in the sport. Building upon this spirit, the West Indies Swim Series expects swimmers of all ages, abilities and backgrounds to take part – whether they swim to win or simply swim for fitness and their own personal goals.  The four initial races in this series have attracted some of the best swimmers in the world, including several Olympians, as well as recreational, youth and adult swimmers who enjoy the special challenge and camaraderie of open water swimming.

Each race will continue to be run independently with its own unique character and distinctive attractions, but the West Indies Swim Series will jointly elevate and promote the region as a world class destination for competition and training.

On March 27th, the series kicks off with the StarMile2.5 Nevis-St. Kitts Cross Channel Swim, a rare and exciting inter-island channel swim. Nevis offers old-style Caribbean tranquility in tandem with one of the most dynamic environments in the region, a place where international elite athletes come to train and compete with outstanding, fun-loving local talent.

The next stop on the series is the June 18th Flowers Sea Swim, a very popular one-mile swim that takes swimmers through crystal-clear water and past tropical fish along majestic Seven-Mile Beach in the Cayman Islands. On this beautifully fast flat course, swimmers range from 8 to 80.
Novices going for their first big swim mix with Olympic medalists for a spirited, friendly race. This race offers what is easily the biggest random prize drawing anywhere.
On July 9th, the Turks & Caicos hosts the “Race for the Conch” Eco-SeaSwim in the spectacularly clear, calm, turquoise waters of Grace Bay on the island of Providenciales. World champions swim alongside visiting and local swimmers through beautiful marine life with plenty of camaraderie. This environmentally tuned event features 1 mile and 2.4 mile race, and a 100-meter children’s swim.
The series culminates on September 25th with the Maracas Bay Open Water Classic in Trinidad.  The race takes place at the base of a breathtaking rainforest sloping down from Trinidad’s northern mountains for a most exotic setting. This long-running, welcoming race, where top ranked international swimmers compete against active and talented local swim clubs, features 2.5K and 5K distances and a 700-meter children’s swim. 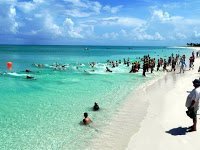 In the future, a West Indies Bluewater Championship Race is being created for 2012 that will draw qualifiers from the top swimmers from the West Indies Swim Series as well as provide an open race venue for all swimmers.

The series website gives a hint of the beauty, camaraderie and excitement that the series will undoubtedly offer.

A great start in a great part of the world for absolutely gorgeous open water swimming – for top-level swimmers and swimmers of all ages and abilities.

Ben Stubenberg appeared on Open Water Wednesday this week to explain the series.