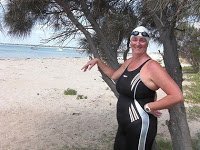 Peter King of Pinjarra in Western Australia tells of an incredible swimmer – Barbara Pellick, a hydrology technician for Alcoa.

Barbara, who started off as a pool swimmer, has crossed the famed Rottnest Channel more times than anyone else on Earth. Her unparalleled record started in 1992 on a relay team and in 1993 as a solo swimmer.

From Cottesloe in Western Australia to Rottnest Island, Barbara is the only person to have done every one of the official Rottnest Channel Swims (20 to date) plus another 3 solo crossings outside of the official event including the first double-crossing in 1994.

In addition to her Australian record of achievement, Barbara crossed the English Channel 12:20 in 1995, participated in a three-way English Channel relay crossing in 1997 (that was actually a foiled four-way crossing due to weather) and was fourth overall in the 2000 Manhattan Island Marathon Swim. In 2009, she joined an international all-star team with Penny Palfrey (Australia), Michelle Macy (USA) Heather Osborne (New Zealand) Lucy Roper (UK) and Julie Bradshaw (UK) to complete the 120.6K triple-crossing of Lake Taupo in 33 hours and 33 minutes. She also completed a 16K ocean swim between Fremantle and Perth for nine straight years.

Well-known throughout Australia for mentoring many other marathon swimmers, Barbara has remained helpful and supportive of all those who have called upon her expertise and experience. “Getting out there and doing it is more important to me than the time now. I really just love the swim and I love the day.”