What Boys Can Teach Girls 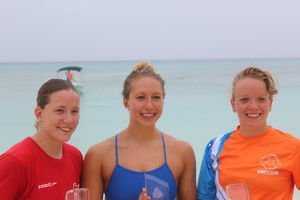 After watching the 5 km races on Saturday and today’s 10 km races, the most physical endurance battle on Planet Earth will be held tomorrow: the women’s 10 km world championships in Barcelona, Spain.

The physicality of the women will go beyond anything short of an ice hockey or martial arts as the women race around the numerous turn buoys for a fast 10 km marathon swim.

And the young women watched the men’s race with focused attention.

Hundled with their coaches and teammates, the women saw mistakes and mishaps, surges and sprints. They were plotting strategy and making adjustments to their race plans. “We got some tips from the boys and it was interesting to see how the race unfolded. Richard [Weinberger] told me not to miss a white buoy!” said Canadian 10’er Nadine Williams.

“I didn’t do the 5 km to focus on the 10 km race so the pressure is on,” explained her teammate Zsofia Balazs. “I think what I learned from watching both the 5 km and 10 km is that anything can happen. Eric [Hedlin] got second in his first race and Richard made a mistake that cost him the gold. I think that demonstrates that truly the race is not over until you hit the touch pads.”

And her strategy took on an ever more profound dimension. “I think I will just do what I did in Cancun and in the Cayman Islands. That is, I will just keep my head on and race. Then look at the end and see what I got for my efforts. I am starting to slowly realize that I don’t have to win to have a good race. Sometimes it’s the effort and the heart I put in is what really matters and what will make it a great race. I will just have to wait and see what tomorrow brings.”

More on the Roughest, Toughest Endurance Race On The Planet here with tomorrow’s line-up of athletes.