What Comes Around, Goes Around In The Open Water 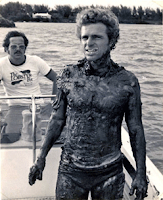 Dr. Sean O’Connell, a mathematics lecturer at Bermuda College and a member of the 24-hour club, completed a 43 hour 27 minute, 47-mile circumnavigation of Bermuda in August 1977.

After his first attempt that ended in failure, he tried again three weeks later. The swim helped raise money for the Bermuda Physically Handicapped Association and inspired a 30th anniversary Round-The-Island Relay Charity Swim in 2007 that raised even more money for the handicapped in Bermuda.

His swim was documented in Tim Johnson‘s History of Open-Water Marathon Swimming, an authoritative book on marathon swimming.