What Conditions Will Penny Palfrey Face For 103 Miles? 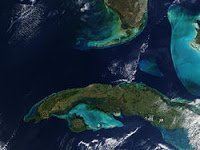 Today is Penny Palfrey’s press conference in Havana, Cuba. Tomorrow morning, she sets off on a 103-mile (166 km) solo journey across the Florida Strait to Florida.

The conditions she may face over the 40-60 hour swim – which appear quite favorable – are predicted as follows:

The water surface temperature is expected to be between 83-90°F (28-32°C)throughout the swim.

Friday Night
Along the coast…west winds 7 to 12 knots. In the Gulf Stream…west southwest winds 11 to 16 knots becoming west northwest 10 to 15 knots. Seas 2 to 3 feet. Intra-coastal waters a light chop.

Vote on how many hours it will take Palfrey to swim from Cuba to Florida on the Daily News of Open Water Swimming.