What Goes Round Comes Around For Andy Truscott 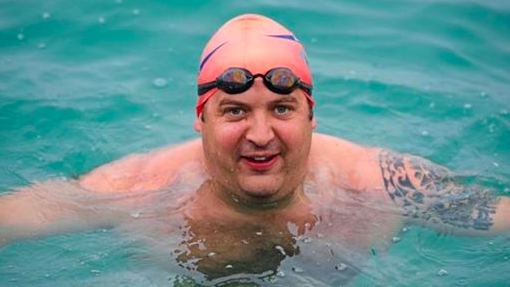 Courtesy of WOWSA, Jersey, California. Ever since Denize Le Pennec pioneered the first Round Jersey swim around the Isle of Jersey in the English Channel in 1969, the 66 km circumnavigation swim has been successfully completed 123 times by people around the world. It took nearly 50 years for Andy Truscott to complete the first double circumnavigation of Jersey. His unprecedented 132 km Double Round Island of Jersey took him 22 hours 7 minutes with a 10 hour 35 minute first loop and an 11 hour 32 minute second loop on July 15th. The Double Round Island swim was his third career record marathon over the past three years. His first record in the Channel Islands was an 18 km crossing from Les Minquiers to Jersey completed in 2016 (7 hours 17 minutes). His second record was his 45 km two-way crossing between Jersey and France completed in 2017 (16 hours 39 minutes). Samantha Jones commented, “[His swim] was simply incredible, not a single complaint, just ploughed on and got the job done.” Truscott, whose favorite motto is ‘What goes round, comes around,’ was grateful for the opportunity, “Thanks to Matthew Clarke and Sam Jones and Richard Billot of Lionheart Pilotage. Thanks to my crew Robin Johnson, Katherine Lowe and Alice Harvey. Also would like to acknowledge Chantelle Le Guilcher and Mark Chegwin who were part of crew but due to numbers had to stay on land. Thanks to Dee Richards and Jenny Fitzgerald for observing. Thanks to the team behind the team Kirsty White for massage, James Lindsay for social media update through SportsHub, Kit Chamier for nutrition, and to Kim Love, Laila DG and Helen for being supportive and following all night. Biggest thanks go to Sharon Truscott and Alexandra Bland for helping look after kids and being supportive.” Video courtesy of Samantha Jones. Copyright © 2008 – 2018 by World Open Water Swimming Association