What Happens In The Channel When The Surf Is Huge? 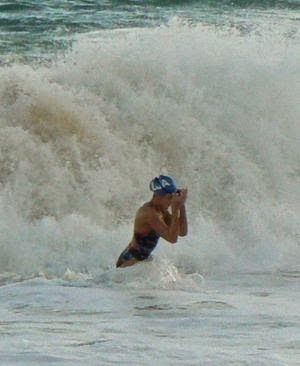 When the surf is high along the Southern California coastlines as it was this week, a few Catalina Channel crossings were cancelled and postponed.

We wonder when the surf is high along the coast…

…what is happening out in the Catalina Channel?
…is there a tidal push or surface currents pushing towards the coast? Is this a potential advantage to the swimmer? …are the currents running (diagonally) northwards fast? Is this a potential detriment to the swimmer?
…is there are pushback (rebound) from the shoreline due to the significant swells that the swimmer will face as the approach the coast?
…do we know these effects with certainty?
…what has been the highest recorded ocean swell height on a Catalina Channel crossing to date?

…does this ever happen in other channels like the English Channel, Strait of Gibraltar, Cook Strait?

Photo above shows what Mackenzie Miller faced when she finished her Molokai Channel crossing on the shores of Sandy Beach, she dodged some sizable waves as she scrambled to shore after 14 hours 45 minutes swimming from Molokai to Oahu in Hawaii.