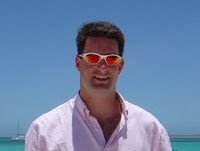 The English Channel swimming community was delighted to hear of Nick Adams‘s eighth successful crossing of the Channel today.

As the president of the Channel Swimming & Piloting Federation, he is well aware of the history and challenge of swimming across the English Channel. The wildly popular and passionate channel swimmer and administrator is still a young man (born 1976) with most likely at least 3 good decades of marathon swimming left.

Thinking out loud, if Adams averages at least one successful Channel crossing for the next 25 years – not an unreasonable possibility considering his physical tools and commitment to the sport – he would become surpass the following men who have made their marks on the English Channel:

Adams might be hard pressed to overcome Alison Streeter, Queen of the Channel®, unless he can replicate the longevity of Dr. Roger Allsopp who crossed the Channel at the age of 72. Theoretically if he maintains his health and passion and if he averages one Channel crossing for the next 36 years, Adams would not only break Dr. Allsopp’s current record for the oldest individual to cross the Channel, but would also overtake Streeter’s record 43 English Channel crossings.

Stay tuned in the year 2048…but these theoretical estimates primarily gives one an idea the incredible durability, commitment and scope of achievement of swimmers like Streeter, Murphy, Read and Renford.