What The New York Marathon Will Do, Open Water Swimming Does 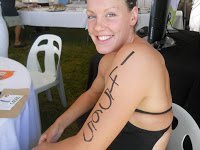 The New York Road Runners organizes the annual ING New York City Marathon. A one-day event, the ever-popular ING New York City Marathon attracts over 45,000 runners. but the Road Runners are considering expanding their marathon to a two-day event over a single weekend event in order to allow as many as 100,000 runners participate. “We could run on Saturday and Sunday,” said race director Mary Wittenberg. “The demand is there. When I started, there was a feeling that the marathon absolutely can’t grow anymore. But I don’t think growth is capped. People desperately want to run this race.”

That is exactly what the largest races in the open water swimming world do, from the aQuellé Midmar Mile in South Africa to the British Gas Great Swim in Windermere, England and the Vasbrosimningen in Sweden.

In order to safely and enjoyably put tens of thousands of swimmers in the world’s largest open water swims, the wise race directors of events like the aQuellé Midmar Mile, British Gas Great Swim and the Vansbrosimningen break up the field into manageable heats, separating swimmers by age, ability, distance and gender.

Photo shows one of the numbered athletes in the aQuellé Midmar Mile. Check out her race number.