What Open Water Swim Could Be More Dangerous? 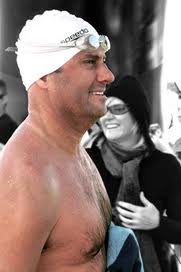 Of all the open water swimming events to be held during the recent past and foreseeable future, we cannot imagine a swim with a higher level of risk and inherent danger than the 86 km Bering Strait Relay Swim scheduled for July 28th.

40 swimmers including the swimmers listed below from 14 countries will attempt to swim 53 miles from Cape Dezhnev, Russia to Cape Prince of Wales, Alaska in 5ºC water, just below the Arctic Circle.*

While hypothermia would normally be considered a problem among normal swimmers in these temperatures, the cold water is precisely the element where these elite extreme swimmers thrive.

While hypothermia may be minor issue due to the cold water acclimatization and experience of these elite extreme swimmers, mishaps will inevitably occur with 40 different swimmers in the water over the course of at least one night and two days.

If the ocean conditions become stormy or turbulent, then the potential for accidents will increase significantly. Just crawling up on the large escort boat in turbulent seas during the night can lead to cuts, bruises, or even broken bones if things get out of control.

If the currents are stronger and faster than the individual swimmers, then the time in the water on the Bering Strait will undoubtedly increase. Perhaps by a few hours, but what about if the team is blown way off course by 10-20 hours more? At some point, even this group of the world’s hardiest extreme swimmers have a breaking point.

And what kind of marine life is in the Bering Strait? It is known that bowhead whales, blue whales, fin whales, sei whales, humpback whales, sperm whales, North Pacific right whales, walrus, sea lions, Northern Fur seals, beluga whales, and orcas exist in the area. Imagine swimming next to a beluga…or an orca. There will be innumerable safety precautions, but during every swim of 40-50 hours the unexpected inevitably occurs.

Despite the possibilities that can occur, considering the hundreds of years of cumulative experience in cold, rough seas by the Russian, Irish, and South Africa swimmers, the team has discussed every possible emergency and determined specific contingency plans to address each of those possible emergencies. And if those plans have to be executed in the middle of the Bering Strait, we could think of no better team of swimmers to be with than those listed below: