What To Do With Blue Bottles? 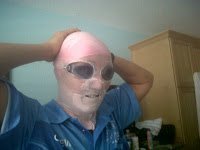 Different swimmers do different things to deal with the dreaded blue bottles, box jellyfish, sea wasps, stingers, Portuguese man o war and moon jellyfish. Stings from these and a few other species (Chironex fleckeri, Carukia barnesi and Malo kingi) are extremely painful and can be sometimes fatal to humans.

While the countermeasures used by swimmers are not allowed under sanctioned swims conducted under English Channel or Catalina Channel rules, individuals attempting adventure swims in other bodies of water are not bound by such rules in their individual attempts.

Stings from these notoriously dangerous marine creatures that swimmers are increasingly running into are unforgettable. It is very rare for a person to be able to withstand over 200 stings as Anne Marie Ward did in the North Channel or dozens of Portuguese man o war stings that Michael Spalding and Linda Kaiser endure in the Kauai Channel. More likely, the stings are debilitating and lead to toxic shock like when Penny Palfrey and Diana Nyad had to be pulled from the waters in Hawaii and the Caribbean Sea.

Many of these debilitating stings are often at night, right after sunset when the creatures seem to rise to the surface of the ocean to do their damage. It seems the warmer the waters are, the more painful the stings seem to be, although there are undoubtedly exceptions to this generalization.

In the case of Shelley Taylor-Smith swimming 90K from Sydney to Wollongong 90k swim, she had to be creative after ingesting blue bottles on her first attempt. On her second attempt one week later, she wore tights (leg stockings) “to keep the stingers off of me. I cut the crotch out and put it over my head and wore the legs as arms and the stockings on my legs and cut the feet out. I also put mesh on the front of my shark cage to disintegrate the blue bottles when they hit the front of the cage.”

As Skip Storch, who attempted to swim from Cuba to Florida in 1993, observed, “[My cage] was more of a Portuguese man o war cage than a shark cage.”

Photo above shows skin and face protection against stinging creatures.