What Was Quadruped Swimming In The 19th Century? 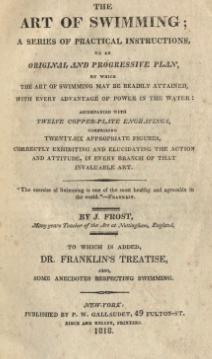 In the book by J. Frost called The Art Of Swimmingpublished in 1818, an era when most people in the water swam breaststroke or some form of sidestroke, he wrote the following passage on quadruped swimming:

“There is nothing very striking in quadruped swimming, and but little progress can be made by it, because our limbs are not formed to act advantageously this way. It is done by striking the hands, alternatively, before the breast, to the extend of the arms, near the surface of the water, and bringing them straight down.

The legs must perform at the same time a similar stroke; but in this way of acting they have less power than the arms; consequently, they afford very trifling assistance. The head is to be held back, and the breast set forward
.”