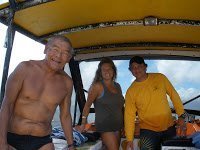 Due to the swells on Maui, Kawauchi had a difficult time selecting a start location on the lava rock shore. During his crossing, he later faced a bloom of Portuguese man o’ war and box jellyfish, but he ultimately finished in 4 hours 45 minutes.