What’s Another 2? The Life Of The Remarkable Dr. Harry Briggs 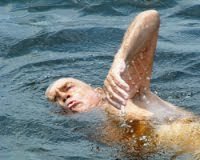 Dr. Harry Briggs, a 1997 inductee in the International Marathon Swimming Hall of Fame is still swimming as he approaches his 90th birthday. Known since the 1950s as The Paddlin’ Professor, Dr. Briggs was the first to swim from Corsica to Sardinia in 1955 and was the first to complete a 32-mile swim across Lake Erie from Sandusky, Ohio, USA, to Point Pelee, Canada in 1957 in 35 hours 55 minutes. He was a political science instructor at Northwestern State University’s Leesville/Fort Polk campus and initiated several scholarship endowments to benefit current and future students at Northwestern. During his career when he appeared on the Ed Sullivan television show and in Sports Illustrated in the 1950s, he swam 58 km in 1957 across Lake Winnipesaukee in New Hampshire. During this unprecedented swim, he completed the first length of the lake and started to swim back until his guide boat lost him for several hours at night. Over his career, Dr. Briggs completed 43 marathon swims. At the age of 76, he swam 16 km across Lake Sunapee in New Hampshire as a fundraiser. In 1998 on his 77th birthday, he spent 14 hours crossing Tampa Bay, swimming seven miles against the current. He made his annual two-mile swim on his 89th birthday in a lake in Louisiana as a fundraiser and plans to do the same on his 90th birthday this year. “There are two reasons to do it, and the first is selfish. I want to see if I can still do it. People get older and too often, lose the desire to challenge themselves. Secondly, but more important, it’s a chance to help young people achieve their dreams.” “I do have demons that enter my mind and tell me that I can’t do it. You just have to drive them out. It’s really in the mind. It’s a great feeling when you walk out of the water and know you can still do it. And, what’s two miles?” Copyright © 2008 – 2011 by World Open Water Swimming Association