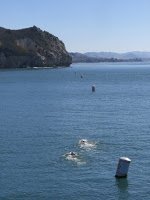 The answer depends who you talk to. But for much of the open water swimming world, the accepted distance of a marathon swim is 10 kilometers. Why?

Some traditionalists believe marathon swimming distances do not begin until a minimum of 15 km or 25 km or 20 miles and use the term ultra marathon swim to define swims of longer distances. The distance of 25 km (15.5 miles) is the often used minimum distance of an ultra marathon swim. This is similar to the running community that defines an ultramarathon (also called ultra distance) as any running event longer than the traditional running marathon length of 42.195K (26.2188 miles).

Photo courtesy of Rob Aquatics. Examples of other definitions of marathon swimming are here.