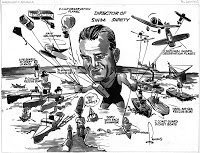 In the archives of the International Swimming Hall of Fame, a beautifully illustration of Captain Roger Wheeler by an artist called Fanning was found. The drawing draws attention to Wheeler’s renowned focus on open water swimming safety set in the backdrop of the Boston Light Swim.

Wheeler is one of the namesakes on the Irving Davids – Captain Roger Wheeler Memorial Award that is given by the International Swimming Hall of Fame to honor and recognize the contribution of individuals and groups making major contributions to Marathon Swimming.

Captain Wheeler was creator of the Rhode Island State Life-Saving system and is also the namesake of a state beach in Rhode Island, named after him in 1970 shortly after his death in 1969.