When And What Swimmers Know Best 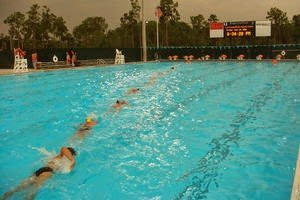 Competitive swimmers know. They know extraordinarily well. They truly have a feel for the water.

Certainly much more so than any other land-based officials can ever appreciate.

Competitive swimmers – both pool and open water – can feel extremely subtle dynamics in any body of water.

Ask a competitive swimmer in a pool workout to swim 10 seconds behind their teammate, then ask the same swimmer to swim 7 seconds, 5 seconds, 3 seconds and then 1 second behind that same teammate. Each time the trailing swimmer will intrinsically feel and understand the changes in the dynamics of the amount of draft they benefit with those simple changes.

The tactile feel, the changes in the surface skin temperature, the minuscule differences of water flow among different scenarios are all well-known and fundamentally understood by competitive swimmers.

However, these very small changes are not only invisible to the naked eye, but the changes also completely unknown by land-based officials, referees, administrators and pool makers.

Similarly to differences in a smile, a handshake, the taste of a meal, or the color of the sunset, the human body and senses can pick up extraordinarily subtle differences between one situation and another. For competitive swimmers, their bodies and senses are completely in tune with the temperatures, flows and dynamics of any body of water where they swim – no matter if the competition is held in a pool or open body of water. These differences are hard to accurately explain in words, but they are easy to sense by physiological means.

Swimmers often tell their coaches of minute changes in the water temperature and conditions: “Coach, the water is cold.” “Coach, I can swim faster swimming closer to the boat.” “Coach, I can feel the current over here.” “Coach, the water is so much colder a meter below the water when I eggbeater.” But coaches typically respond simple by statements like “Get in the water.” “Keep swimming.” “Don’t complain.” Those responses are immediately verbalized without the coach or other land-based official truly understanding the subtle differences that are easily picked up by those in the water.

So the controversy at the 2013 FINA World Championships in Barcelona, Spain is easily understood. On one hand, swimmers quickly, easily and profoundly picked up on the changes of water flows and dynamics between the different lanes in the Myrtha Pool that was built specifically for these world swimming championships.

While rumors swirled around the pool deck among swimmers, the coaches, administrators, pool builders could not possibly understand what the swimmers’ senses. Just as a fighter pilot understands certain nuances of supersonic flight, just as a financier understands the global trends that may affect currency exchanges, just as a painter can understand how a mixture of hues will affect a painting, the swimmers immediately understand the essence of what was happening in the water.

Swimming World Magazine and the Wall Street Journal, as well as publications from France to Australia, have reported that all lanes at the Myrtha Pool were not built equally. Joel Stager, Chris Brammer, and Andrew Cornett carefully researched and compared a variety of data and concluded that “…the evidence…suggests that there was a lane bias during the 2013 FINA World Championships and the bias had an effect on swim performances. This we show to be true within a swimmer’s race as well as when races for a given swimmer were compared against each other.”

Their analyses is presented here.

The authors were clear to not pass judgment on the physical properties of the pool. FINA representative Viktoria Dijakovic noted that there was no confirmation of the presence of a current in the world championship pool.

But swimmers know. They know extraordinarily well. More so than any other land-based officials can ever appreciate.

Dijakovic said, “By definition, pools don’t have a current.”

But swimmers know and feel. There is no falsehood in what the body of a competitive swimmer feels when there are dynamic forces at play in the water. Pool and open water swimmers have known this for generations.

So despite subsequent tests by Myrtha and FINA that showed no discernible current, the controversy continues to be discussed.

According to the Wall Street Journal, “Myrtha is devising a sophisticated means to detect water currents in their pools and will test it at the European Championships. FINA will use it before all championships and consider requiring the measurement of water movement before competitions.”

Devices and sophisticated measures may be able to discern precisely what swimmers know well and have an intrinsic sense to understand when rules or venues are working to their advantage – or not.