When Are Stinger Suits Used? 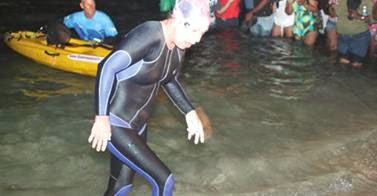 While stinger suits are used by only a very small handful of open water swimmers around the world during swims where the danger of box jellyfish and other venomous marine life exist, the issue has attracted the attention and interest of the marathon swimming world (see here).

Because so few swimmers use stinger suits in their sport, information about the use of stinger suits also tends to be limited. Fundamentally, stinger suits are used in warm-water parts of the world where venomous creatures are probable to sting swimmers and are used largely at night – from before sunset to just after sunrise.

Because the porous swimwear gets waterlogged, becomes so heavy, and is not conducive to swimming fast or becoming buoyant, they are not used throughout the entire swim.