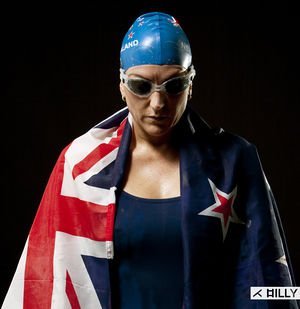 Now that Kimberly Chambers is ranked sixth on the global Oceans Seven rankings, her profile in the sport is increasing.

With the Cook Strait, English Channel, Catalina Channel, Molokai Channel, and Strait of Gibraltar under her belt, she only has the Tsugaru Channel and the North Channel to complete in order to achieve the Oceans Seven. Given the fact that cold water is a welcomed treat for her and her swimming speed is increasing, the probability of completing the Oceans Seven is looking mighty bright.

But no one – including Chambers herself – would have guessed that she would be bubbling on top of the marathon swimming rankings back in 2007.

Six years ago, the then 30-year-old former ballerina was diagnosed with Acute Compartment Syndrome of her right leg after an inadvertent fall down a staircase on her way to work. “I was literally 30 minutes from having my right leg amputated from the knee down. With this condition, all the blood flow to the nerves in my leg was impaired and my leg essentially began to die.”

For someone who had been active and athletic all her life, this possibility was traumatic. Fortunately, her doctors explored every possible option and destiny intervened. There was still just enough blood flow to operate and perform an emergency fasciotomy which saved her leg.

“Once the doctors saved my leg, I was expected to be disabled for the rest of my life. I would have to wear an ankle-foot brace in order to be able to walk.” But Chambers was not about to simply accept the what then seemed her unfortunate fate.

“I attended physical therapy sessions full-time for 2 years following my injury. I didn’t work and focused on the therapy, but I still walked with a limp and could neither walk long distances nor run. So, I figured, ‘Maybe I could remember how to swim? I learned how to swim in primary school [in New Zealand] as part of our water safety and physical education.”

Chambers literally took baby steps. “I started with small goals in a pool in October 2009. Then in November 2009, a friend from the pool dared me to swim in the San Francisco Bay. I jumped in 53ºF (11.6ºC) in just a swimsuit, swim cap and goggles. I loved it. I was hooked!” Once hooked, she looked for more outlets for her new passion. “I joined the Dolphin Club in December 2009 and swam my first open water swim from Alcatraz on my 33rd birthday on June 12th 2010. I gathered a small group of Dolphin Club friends and nicknamed the swim ‘The First Annual Kiwi Invitational Escape from Alcatraz!’”

She even made T-shirts and celebrated the physical breakthrough with a hearty gusto that she has become known for. “Alcatraz was my first open water swim. I’m now a medical case study for making a rare and remarkable recovery.” But little did she know then that she would be stepping up her distance and soon on her way to new challenges. “I was introduced to Vito Bialla in February 2011. He took an interest in my enthusiasm for open water swimming even though he later told me that ‘I couldn’t swim my way out of a paper bag – with flippers on.’ Vito believed in me and invited me to be an alternate swimmer for the [30-mile] Farallon Islands relay team. One team member had to pull out for personal reasons. So I got the call. On both May 20th 2011 and then again on June 4th 2011, I participated in two Farallon relays. I organized the second relay myself as the first all-women’s relay to the Islands. I completed a few more relays that year including the Manhattan Island circumnavigation and the English Channel.”

The hook was deep.

“I decided to attempt a solo across the English Channel just a few days after my relay. Most people thought I was mad, but I simply wanted an adventure and to get a taste for a solo.” She didn’t make her initial English Channel attempt, but that only gave her more incentive to continue. “I vowed I would return and so I joined a masters swimming team – the North Bay Aquatics Masters – at the end of 2011 and decided my first successful solo would be at home in New Zealand. On March 5th 2012, I swam the Cook Strait. My obsession and love for open water swimming was officially born.”

After the Cook Strait, then came the Strait of Gibraltar, Molokai Channel, Catalina Channel, and English Channel with a crossing of the Lake Tahoe thrown in for good measure.