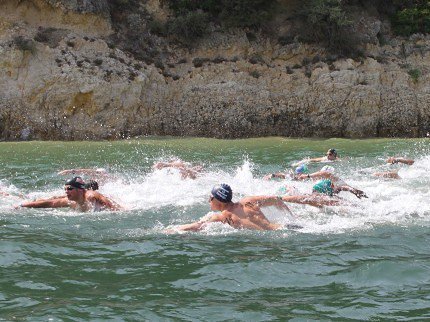 In endurance or extreme sports, many rivals know each other well. They understand what each athlete has to do, what they must sacrifice and how they both train. They know they put in the hours and accept the rigors of their sport.

So when they meet at a competition, smiles, handshakes and hugs are usually the order of the day. They remain respectful and are friendly. It is the ultimate in sportsmanship. It is what sports are meant to be.

But once the start gun goes off, the competitive juices start to flow and it is a battle. They leave everyone in the field of play and understand that the best athlete on that day will become victorious. Some will be winners and others not. Some will come out on top, win medals, glory and occasionally money and endorsements. Their rivals, in contrast, will go home bitterly disappointed to live another day where they can reverse the order of finish.

But with the Olympics on the line, rivalry among friends takes on more profound level of intensity.

This is what happened yesterday at the International Triathlon Union World Triathlon San Diego where Laura Bennett and Sarah Haskins had a duel within the overall event, each racing for the last position on the USA Olympic Triathlon Team. While Scottish-born Helen Jenkins and Australia’s Erin Densham went 1-2 in San Diego, Bennett or Haskins were heading into the run leg knowing only one would come out on top among the Americans.

“It’s terrible. I hate that it had to come down to us in a head-to-head kind of thing,” said Bennett who earned the right to wear the red, white and blue in London. “It sucked. Sarah and I are good friends, so it’s even worse.”

The same situation will happen in Portugal at the final Olympic marathon swim 10 km qualification race. Within the beautiful Setúbal Bay along the Portuguese coast south of Lisbon, the June 9th (women) and June 10th races will be nail-biters. Not only will the top 15 athletes qualify for the Olympic marathon swimming 10km final at the 2012 London Olympic Games, but there will be very close races-within-races that are intriguing and will command the attention of swimming fans around the world.

Who will represent the American women; Ashley Twichell or Haley Anderson? What about the Mexicans? The British men? The South Africans? The Argentines? Will the Chinese and Japanese be represented in open water swimming at the Olympics, in both genders? Will both Kiwi swimmers represent New Zealand in London? Will Valerio Cleri return to the Olympics? What about Petar Stoychev and Damien Blaum: can they also return? What about newcomers like the powerful Chris Bryan and Mexican stalwarts Alejandra González and Luis Escobar?

Only the fastest swimmer from each country will qualify. So while athletes will be clearly vying for a top 15 spot – they also have to be their country’s top finisher to punch their ticket to the Olympics.

Dozens of world-class competitors. Two per country. Only 15 Olympic spots available…one per country.

It’s cruel. It’s black and white. But the mutual respect remains once the athletes climb back onshore. The way it should be in the open water world.