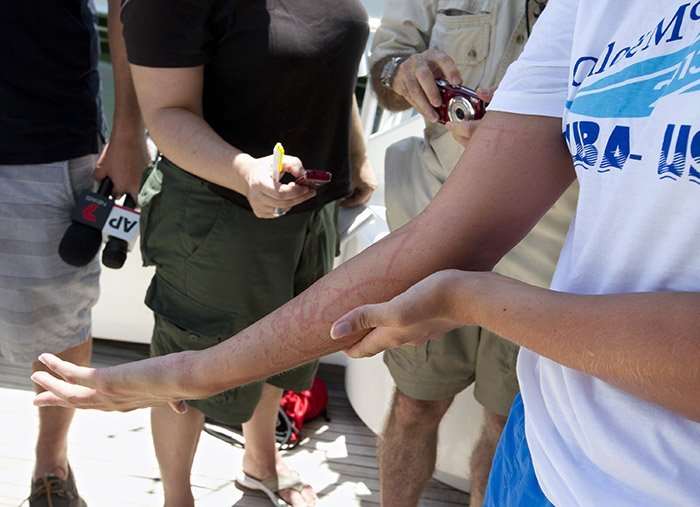 While most people who spend their time entirely on terra firma believe sharks are always lurking out for swimmers in the oceans, open water swimmers are much more likely to encounter mammals and invertebrates in the oceans around the world.

While there may be locations where shark sighting, encounters, and attacks are more prevalent than others, jellyfish stings far outweigh the threat of Jaws on a global basis.

And as the world’s marine ecosystems continue to change, as the water temperatures increase, as the shark populations trend downwards, and as the global proliferation of jellyfish continues to explode, the chances of swimming in, on, around, and across the gelatinous invertebrates skyrockets.

Even with the memory of the film Jaws stamped firmly in the minds of Baby Boomers and the annual gore fest of the Discovery Channel’s Shark Week entwined in the consciousness of the Millennial Generation, we believe it will be within a generation when people will more likely ask open water swimmers, “Have you been stung [by a jellyfish]?” before they ask “Aren’t you afraid of sharks?”

Projected out towards the end of this century, we are convinced that the jellyfish threat will be foremost on the minds of ocean swimmers and most of their friends and family who remain onshore. There will be skin ointments, swimwear and a variety of pre-swim and post-ocean products to either prevent or treat jellyfish stings. And it will be jellyfish that will become the dominant topic of conversation among swimmers and their land-based friends rather than sharks.

The shift from shark scares to jellyfish worries will be gradually at first and then will shift into high gear as more and more wounds, reactions, and scars become commonplace among open water swimmers and all those who venture past the shorelines.

During the California coastline relay swim last year by the Night Train Swimmers of San Francisco, the members of the SF to SB Relay encountered all kinds of jellyfish while the shark scares receded to the back of their minds. “The jellyfish were always around, but they came up in numbers around dusk and stayed around on the surface until dawn,” recalls lead-off swimmer Phil Cutti who attempted to swim 339 miles (545.5 km) non-stop from San Francisco to Santa Barbara along the California coast with Captain Vito Bialla, First Mate Patrick Horn, Dave Holscher, Joe Locke, Kim Chambers, and Zack Jirkovsky. “During the day the majority were below arm’s reach, but a few lingered. We saw all types, but I would categorize them as floaters.

There were ones that looked like cheese puff and long Cheetos – yeah, that neon orange color and puffy circles and cucumber shape. Those really hurt! Crossing Monterey Bay was epic. You could see them down there, well out of reach. At dusk it was like bats coming out of a cave. We were surrounded and the ocean went from a blue-green slate color to a black as the night sky with jellies. There was no escaping them.”

Just as canaries in the coal mines were the front-line indicators of danger in previous generations, open water swimmers currently serve as indicators of the growing menace of jellyfish in the world’s oceans. We believe many more ocean goers will be more frequently stating those kinds of statements like Cutti did over the next few generations: There will be no escaping them.