The West Australian reported that a swimmer’s leg was cut when their leg hit a boat propeller during the Rottnest Channel Swim.

While her injuries were reportedly not serious and three rescue boats tended to the injured swimmer, this accident is another reminder of the inherent risk of open water swimming when boats and swimmers are in close proximity.

In one of the world’s most carefully planned and organized open water swims, the Traversée internationale du lac St-Jean, the organizers provide numerous safety procedures and policies that are based on decades of practical experience.

One of their safety priorities relate to the protection of swimmers in the water. The Traversée internationale du lac St-Jean provides customized prop guards on their escort boats so swimmers cannot be cut by boat propellers.

These are especially important because the professional marathon swimmers who compete in the Traversée internationale du lac St-Jean not only swim closely to one another, but the coaches frequently direct their boat drivers to get very close to their athletes which means that boat propellers and swimmers can be in dangerously close proximity.

Over a marathon swim, anyone can get a bit inattentive and accidents can happen in a blink of an eye.

In order to prevent any potential problems and unintended accidents, the organizers of the Traversée wisely installed prop guards several years ago.

Tom Hecker, a renowned channel swimmer, has proposed use of the Prop Guard because of his own close calls with propellers during his swims. 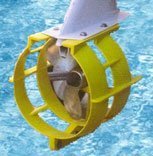 “It happened after I completed my Strait of Gibraltar swim. I was approaching the Zodiac where my driver, lifeguard and wife were. The driver was positioning the Zodiac next to the pilot boat while preparing to transfer the lifeguard, my wife and supplies to the pilot boat and while I was swimming in from the shore. I approached the driver from behind on his right side. The driver was concentrating on the transfer. The two boats separated when a wave hit, so he gunned the motor to get the boats closer. His attention was on the transfer and the position of the boats. At that instant the swimmer was forgotten. I saw the prop spin in front of my hand as I was taking another stroke.

My wife screamed and the motor and prop were stopped. That instant could have been disastrous.”

These situations happen more often than governing bodies and many enthusiasts realize around the world. Tom asks, “Perhaps a Prop Guard at US$250 should be mandatory on all swimmer support vessels?”

While constant vigilance is always the primary goal, there are moments and situations occur during open water swims that are unexpected yet inevitable: such as when the sun’s glare reduces a pilot’s view, crew members momentarily block the view of the captain, waves causes problems, swimmers inadvertently or unexpectedly swim behind a boat, or there are mechanical difficulties.

Photo by Mogens Johansen of The West Australian.