When Pools And Open Water Are Not Available

When Pools And Open Water Are Not Available

Dr. Lyle Nalli and his masters swimming group in Seal Beach started to miss their early morning workouts because all the pool and fitness gym are closeds due to the coronavirus pandemic.

With the local pools closed and the recent rains in Southern California, they had no choice but to do dryland workouts.

So they gathered at their normal time (5:30 am) and did circuit training … with a twist. They used the pneumatic KAATSU Aqua Bands and included sets on Dr. Nalli’s Vasa Trainer in his garage.

After warming up with KAATSU Cycles on their arms and legs using the KAATSU Cycle 2.0 unit, the swimmers did 45-60 second sets with the KAATSU Air Bands inflated to 250 SKU.

“The reason why KAATSU on Vasa Trainers is so effective and efficient is because the recruitment of muscle fibers skyrockets with KAATSU Training when the limbs are engorged in blood,” explains Steven Munatones, a teammate of Dr. Nalli’. “The Japanese sports scientists and coaches have understood this since before 2000 when a paper titled Effects of resistance exercise combined with moderate vascular occlusion on muscular function in humans was published in the Journal of Applied Physiology.

While the pneumatic bands around the upper arms – or upper legs – appear to be some kind of tourniquet, it is not. There is no occlusion or cutting off with blood as you would expect with a tourniquet or blood pressure cuff. With gentle pressure, the bands serve to allow arterial flow from the torso to the limbs to continue, but the rate of venous return – or the blood return back from the limb to the torso – is modified or slowed.” 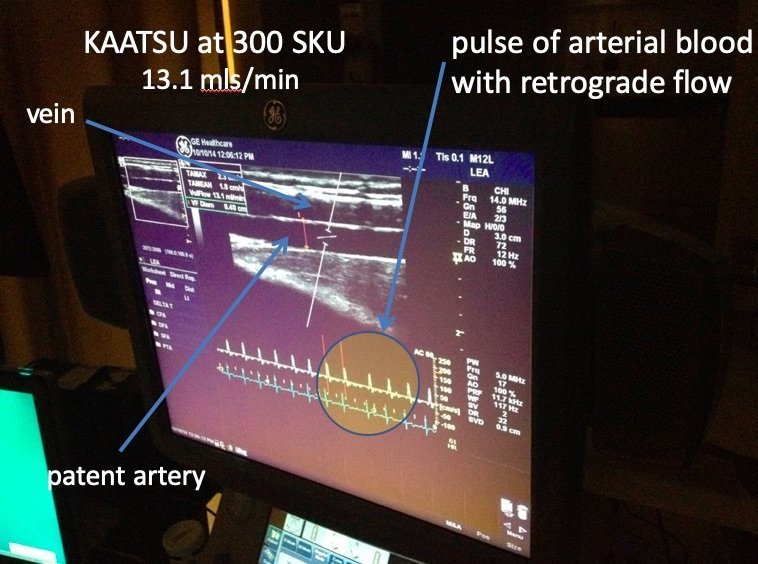 The ultrasound image on left shows the brachial artery and brachial veins at 300 SKU during KAATSU of a 21-year-old collegiate athlete remains unobstructed without occlusion.

One of the findings and subsequent understandings of the benefits of KAATSU is that there is an increase in muscle fiber recruitment that has significant implications for athletes and older people. The moderation of blood circulation and the hypoxia and acidic intramuscular environment during KAATSU also leads to additional motor-unit recruitment.

This increase of muscle fiber recruitment with KAATSU means that Dr. Nalli is effectively training more vigorously than normal, but he can avoid the usual fatigue and muscle soreness than comes with intense sustained exercise because there is no microtrauma in his muscles.