When The Sea Is Angry, Times Are Tough 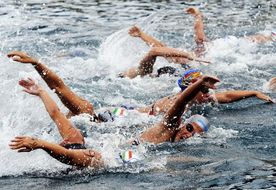 The swimmers and officials want for nothing in Cozumel at the FINA 10K Marathon Swimming World Cup and FINA Open Water Swimming Grand Prix races. There are buffets everything in the hotel as the international guests are treated like kings and queens by the Mexican Swimming Federation and the local sponsors.

Safety Delegate Shelley Taylor-Smith called the venue perfect for the open water swimmers. “The swimmers and coaches loved the venue. The conditions are perfect for an international competition.

The athletes walk out of their hotel 10 meters to the venue. The hotel food and refreshments are available from 7 am to 11 pm. The only thing that the swimmers need to purchase is their hydration for race day. The hospitality of the host federation Mexican Swimming, the hotel and the organising committee are outstanding. As for the water, its quality is perfect and the water clarity is stunningly beautiful with coral and fish. It is difficult to compare this venue with any other. All the swimmers and coaches said they want the world championships here
.

Even the hotel guests commented that the FINA race was a great bonus to their already enjoyable vacation.”

But the sea was not so hospitable to the foreign guests over the weekend’s FINA 10K Marathon Swimming World Cup. The winds and currents, running up to 1.7 knots, played havoc with the fastest and strongest open water swimmers in the world.

During the women’s race in the 1.25 km loop course, many of the women went way off the tangent lines between the turn buoys. Some of these decisions to swim off the straight-line tangents were intentional, but many other times, the currents were just too strong. Some women tried to find as much slack water as possible as they swam near to shore around the loop course. But sometimes the pack just completely missed the turn buoy and were swept off the course. As the women started in a large unified pack around the first turn buoy, it was literally cut in half by Mother Nature.

The faster half of the lead group was able to get around the first turn buoy in fine form, but the second half of the pack missed the buoy and had to fight and claw its way against the winds and 1.7 knot current in order to get back on course. By the time, the second half got around the turn buoy, they were already 150-250 meters behind the leaders…and the race was not even 600 meters completed yet. As the packs split, it literally became a 2-pack race that was eventually won by Italian world champion Martina Grimaldi over a tough-nosed Eva Fabian of the USA.

The men fared no better. Many of the men missed the final turn because the currents were running so strong that the dynamics of the ocean simply swept them past the turn buoys and off-course. Spectators onshore mused that it was the smartest swimmer who could read the currents who would be in an ideal position to place high.

But 90% of the first pack of 60 swimmers missed the very first buoy by 50-60 meters. They as they might to aim for the large red buoy, the strength of the currents simply overwhelmed them. In addition because the splash of the 60-swimmer pack prevented many of them from seeing the buoys anyway as they were in a sprinting aggressive mood at that point. Like the women’s race, there was a definitive time in the race that split the pack, and ultimately led to the final results. In the first loop, the second half of the field already found themselves behind by 150 meters.

But Great Britain’s Daniel Fogg must have the DNA of British mariners because he positioned himself in the lead for most of the time. Together with top Italians, Fogg swam well and swam smartly. At a time when his competitors were having problems obtaining their feeds, Fogg suddenly put on a tremendous surge and built up a 20m lead that he held to the finish. Thomas Lurz of Germany nearly caught him, but Fogg looked strong throughout the race and no one ultimately could catch him. With the constant physicality faced by the swimmers in addition to the brutality of the conditions, it was survival of the fittest. And Fogg was certainly the fittest this weekend.

With many of the swimmers staying in Cozumel for the 15 km FINA Open Water Swimming Grand Prix race, there is surely going to be Round 2 of the heavyweight match between (wo)man and nature.