When SEALs Stand Up To Sharks 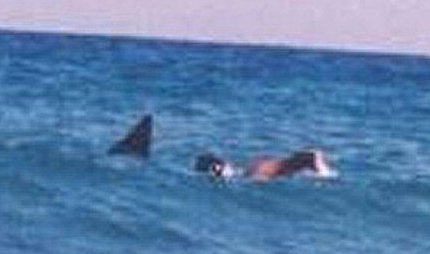 When SEALs Stand Up To Sharks

Scott Zornig of the Santa Barbara Channel Swimming Association occasionally encourages qualified marathon swimmers to think about swimming from San Clemente Island to the California mainland, a 52-mile rough water swim that was pioneered in 2012 by Tina Neill who took 28 hours 41 minutes to swim from LCI Point to Terranea Cove on the Southern California mainland.

Admiral William H. McRaven, ninth commander of the U.S. Special Operations Command, gave a popular, inspirational graduation speech at the University of Texas on May 17th in which he mentioned San Clemente Island which is owned by the U.S. Navy.

In his speech (see video below), he talked about sharks and how to deal with them:

“…during the land-warfare phase of [SEAL] training, the students are flown out to San Clemente Island near San Diego. The waters off San Clemente are a breeding ground for great white sharks. To pass SEAL training, there are a series of long swims that must be completed. One is the night swim.

Before the swim, the instructors joyfully brief the trainees on all the species of sharks that inhabit the waters off San Clemente. The instructors assure you, however, that no student has ever been eaten by a shark – at least not recently.

But, you are also taught that if a shark begins to circle your position, stand your ground. Do not swim away. Do not act afraid. And if the shark, hungry for a midnight snack, darts towards you, then summon up all your strength and punch him in the snout and he will turn and swim away

While the graduates of the University of Texas may believe this is simply brash talk by a tough Navy SEAL or the actions only capable by trained SEALs, it is also true that several open water swimmers have come face-to-face with sharks and stood their ground.

The fight-or-flight response is a normal human reaction that occurs when there is a perceived or actual event, attack, or threat to survival. For most ocean swimmers, it is time for flight when a shark cruises by. But not for all.

When a shark approaches a swimmer or triathlete, what do they normally do? Do they stop and fight to survive? Do they take off swimming madly in escape? Do they just freeze and stay in place? Or do they keep on swimming?

The fight-or-flight response is activated by the body’s autonomic nervous system in order to give the body increased strength and speed in anticipation of fighting or running. In the case of swimming out in the ocean without the ability to out-swim a shark (or other creatures including leopard seals and sea snakes), the ability to fight or flee is significantly reduced. The effectiveness of a punch, a kick or a sprint are less optimal options in the water than on land.

So while the brain and body kick into overdrive and specific physiological changes occur, is there also some sort of inherent acknowledgement by the brain that the normal fight-or-flight response is not possible in the ocean. Does the brain know the options are fight-or-flight-or-freeze in the ocean, especially far away from shore or one’s escort boat and crew?

That is, in the case of a bear or a criminal attacking a person, the victim experiences increased blood flow to the muscles that are diverted from other parts of the body, increased blood pressure, heart rate, blood sugars, and fats in order to supply the body with extra energy, an enhanced blood clotting function in order to prevent excessive blood loss in the event of an injury, increased muscle tension in order to provide the body with extra speed and strength, dilated pupils to help see with increased clarity, and increased perspiration to prevent over-heating due to the increased metabolic rate.

But the resultant burst of speed and strength that is normally activated on land is clearly stifled in the water. Some humans like Gary Hall Jr., Achmat Hassiem, and Mike Spalding instinctively switch to the fight mode. But it is interesting that both Hall (read his shark encounter account here) and Hassiem (read his shark encounter account here) were also of the mind to protect their siblings who were also in the water at the time. Like a mother protecting her child, if a younger sister (in the case of Hall) or a younger brother (in the case of Hassiem) were not also in the water at the same time, would there have been a similar response?

Or without someone to protect, would these swimmers flee, sprinting wildly to the nearest shore or boat? While this may not be the most well-advised move, some swimmers instinctively panic and logic is a lower priority than the inherent need to quickly move away from the shark.

Or without someone to protect, do swimmers simply freeze with their heart pounding and every cell in their body screaming to end the nightmare and hope the shark will simply swim away uninterested in any actual encounter?

One never knows until that moment comes.

When Linda Kaiser and Michael Spalding were swimming side-by-side in Hawaii and a shark came swimming up from the depths towards them, the moment came.

Spalding did what Admiral McRaven advised: “Stand your ground. Do not swim away. Do not act afraid.”

In the middle of the Pacific Ocean, far away from shore without anything but goggles and a swimsuit, Spalding kept his eye on the shark and his head buried under the water’s surface, his eyes glued on the shark closing in on them. Protectively and certainly courageously, Spalding cocked his arm up in order to punch the shark as Kaiser stayed close by his side. Focused and fearless, the SEAL-like Spalding was clearly not backing down.

Fortunately, the shark veered off as it approached and the pair swam on with a memory forever etched in their brains.