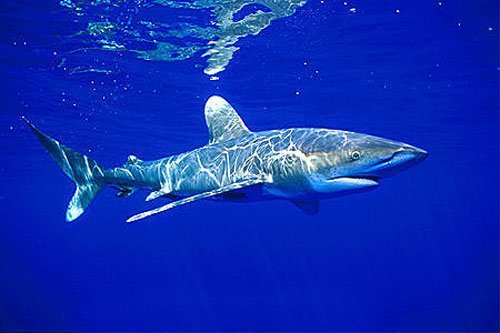 As Diana Nyad was nearing her 19th hour in the deep royal blue Caribbean Sea, a curious oceanic whitetip shark approached Nyad’s flotilla. Her support team on board her escort flotilla observed the whitetip swimming 2-3 meters under the surface a few hundred meters behind her and her mothership.

The shark’s distinctive white tips reflected off the canvas of royal blue as it approached Nyad from the rear.

Although during the planning sessions prior to the swim we had talked about shark encounters far from shore, this was a time for action. No time to talk, just act. Not armed with guns or spears, shark diver Rob MacDonald of West Palm Beach, Florida sprang immediately to action with nothing more than a stick covered with at the ends with a tennis ball. He dove into the water to attempt to steer the whitetip away from Nyad. No bravado, just quiet, quick-thinking professionalism like a Secret Service bodyguard jumping in to save a high-level politician. MacDonald, supported by his colleagues Drew Johnston and Jonathan Rose, showed no hesitation and no worries or regrets. He just dove in the royal blue water into a heightened state of alert.

MacDonald entered the glassy flat doldrums under cloudless skies with free diving fins and a 1-meter-long pole with a soft tennis ball stuck to the end to it. He moved as calmly as humanly possible in the water, he kicked easily and smoothly with his long fins, snorkel positioned above the water’s surface like a periscope, and his long pole clutched at the ready.

But this was not an inhospitable encounter that was going to erupt to a feeding frenzy; the shark vs. man encounter was merely an expression of temporary territorial rights. “I don’t want to hurt the sharks. The sharks are our friends,” explained MacDonald. “We just want to keep the sharks away from Diana. I never saw any aggression from the shark. While I approached the shark, it was so beautiful. I wish I had my camera. The shark never lowered its pectoral fins or arched its back. When a shark does that, it is ready to attack.“

As the shark continued to circle underneath, MacDonald continued to play offense on the surface of the water. Johnston and I were on a inflatable raft trying to give MacDonald an extra two sets of eyes attempting to keep track of the constantly moving shark as it came in and out of our peripheral vision. As the shark moved quickly, so did MacDonald. He shadowed its movements, back and forth. As the shark circled, MacDonald circled. Like a silhouette, they mirrored each other’s movements. This was not some dramatic television reenactment, it was real life unfolding before our eyes.

After the preliminary rounds of feeling each other out, the shark suddenly rose to the surface while MacDonald dove down to meet it like two heavyweights squaring off in mid-rink.

To the disbelief of the crew watching closely from the four escort boats, MacDonald dove below the surface like a protective mother bear. He kicked his fins in order to face the shark head-on, never letting the shark out of his sights. The two faced off in the silent arena underwater, each respectful but unnerved by the other. As MacDonald continued to delve below the surface, it became difficult to exactly see what was happening and even more unbelievable to imagine what could happen next.

Like two locomotives on the same track, something was about to give. Fortunately, the shark clearly sensed a formidable denizen in the Caribbean depths. Like two enemy jet pilots swooping at one another in a wartime combat in the skies above, MacDonald and the shark locked onto one another in the depths below. We held their breath and just stared at the abyss for both combatants were increasingly obscured underwater. Johnston and Rose were at the ready as even they wondered what the next move was going to be.

Mano-a-mano was replaced by mano-a-apex predator.

While the shark’s pectoral fins remained static, MacDonald made a forward thrust with his soft pole in front like a knight with his lance out. “That (move) was enough to convince it to swim off. I never hit it. He just dove down to 60-70 feet and he headed off in the opposite direction of Diana.” Safely separated from the curious predator, Nyad kept stroking on, protected once again by the clearly heroic but stoic shark diver. MacDonald climbed nonchalantly on board to the whoops and hollers of the crew…and readied his camera for the next encounter. There were few encounters in the sea that have impressed us as much.