When Sharks And Jellyfish And Open Water Swimmers Meet 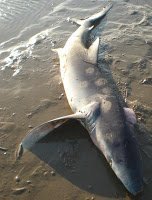 According to Daily Mail, a five-foot blue shark washed up on a Sussex beach. The here.

While locations like the Cook Strait where rules have been established to address the shark issue, sharks have generally not been among the primary worries of channel swimmers in the English Channel.

In the Cook Strait, if a shark is sighted and a swimmer wishes to do so and their crew deems it prudent to do so, they may get out of the water and remain safely on board their escort boat for a maximum period of ten minutes. They may resume the swim at the exact same point (via GPS) where they got out. 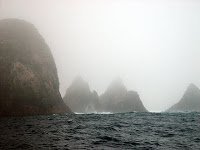 However, the rules in other locations still maintain the strict no-boarding rules of the English Channel swimming community despite having sharks, including the Great White Shark, clearly visible. Swimmers heading to and from the Farallon Islands (shown on left) – a swim between the Golden Gate Bridge in San Francisco and the Farallon Islands 30 miles to the west – nearly always encounter Great White Sharks, from the 1960s to the present. Swims between the Channel islands off the coast of California are also known as shark alley where 10-14 foot sharks are commonplace.

So as the ocean ecosystems are changing, a growing global menace of jellyfish, both in size and number, is being documented, and more sharks being seen in places. These facts, in combination with the worldwide growth of open water swimming in terms of the number of swimmers, places where they swim and distances that they swim, may present issues for swimmers and governing bodies.

Tradition and time will tell.