When The Tides Turn, Go With The Flow 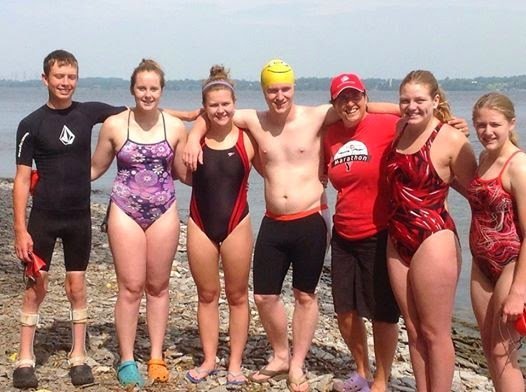 Days before the start of their postponed swim on August 16th, the fickle conditions of Lake Ontario raised other issues.

Team leader Vicki Keith explains the current situation with the pod of 8 physically disabled and able-bodied athletes. “It has been a tumultuous couple of days. The water temperature forecast changed drastically on Sunday. Predictions of water temperatures for the next week are around 10ºC (50ºF) for parts of the lake and very little above 15ºC (59ºF) is forecasted until close to Kingston. It is not safe for the athletes to swim in these temperatures.

One of the lessons that we reinforce as a Kingston YMCA Penguin is that there is a solution for every challenge. Last night at a team meeting, we agreed on a new opportunity that would allow the team to put their year of focused training to work and set a record.

The Y Penguins’ new focus is a record for the longest continuous open water relay by a fixed number of athletes. The present record is 366.93 km [set by 6 Night Train Swimmers down the California Coast from Point Conception to San Diego on August 2013]. The Y Penguins team are now in the process of plotting a course where the athletes will cover this distance, set the record, but stay in safe waters.

The relay will start Saturday morning at 10:00 am in Trenton. The athletes are understandably disappointed that they will not be able to achieve the original goal that they have trained for all year, but are excited to get in the lake for this opportunity and set a record

Further information will be announced once the route is confirmed.

The Great Lake Adventure is in support of the Kingston YMCA Strong Kids Campaign that raises funds to help young people with disabilities continue to learn about their abilities and develop the skills to step into life with strength of spirit and confidence.

To make a donation, visit here.

To watch a television interview on Station 14 on the Great Lake Adventure team, visit here.