When Turtle Made A Mark In The Open Water 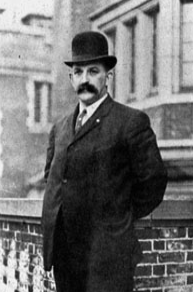 In the book entitled Speed Swimming by C. M. Daniels, published in 1919, renowned swimming coach George Kistler of the University of Pennylvania wrote, “The crawl stroke is the fastest means today of propelling the body of a human being from its own power through the water, the peculiarity of this stroke being considerable.”

The Penzance native made his mark as a competitive swimmer, coach, administrator and aquatic sports educator, first in his native England and later in his adopted United States.

In addition to teaching generations of college students at the University of Pennsylvania, he also coached luminaries in the sport like Duke Kahanamoku for six months prior to the 1912 Stockholm Olympic Games where he won a gold medal in the 100m freestyle and silver in the men’s 4×200m freestyle relay.

While living in England and working with father, he won the 1887 Mile Championship of the World Race at the Jubilee of Queen Victoria. After moving to the U.S., he swam in the Delaware River from Philadelphia to Red Bank and back, a 14-mile 3 hour 57 minute swim. He also swam in the Delaware River from Philadelphia’s Market Street pier in a 37.5-mile 11 hour 11 minute marathon swim.

He once considered swimming across the English Channel, but a lack of financial support prevented him from attempting the swim.

But back in the U.S. at the 1901 Sportsman’s Show in Philadelphia, the Ojibway native American tribe held an exhibit about their village. At the show, the University of Pennsylvania swimmers took part in aquatic competitions with the tribe.

Under the guidance of Kistler, the collegiate swimmers impressed the tribe leaders with their swimming skills and were given a traditional Indian name at the end of the exhibition.