Where Are They Now? David Alleva 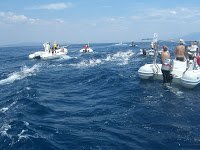 Where Are They Now? David Alleva

Dr. David Alleva was inducted in the International Marathon Swimming Hall of Fame in its Class of 1992 as an Honor Swimmer.

Dr. Alleva consistently placed in the top three throughout his marathon career in races in rivers in Argentina, lakes in Canada and the Mediterranean Sea. His podium finishes included second place in the 1991 and 1993 Traversée Internationale du Lac St-Jean (40 km in 10 hour 19 minutes and 10 hours 28 minutes respectively) and third place in the 1990 Maratón Acuática Internacional Santa Fe – Coronda (57 km in 7 hours 9 minutes).

He is currently an immunologist, focusing on drug discovery and development in the biotech and pharmaceutical industries. Not surprisingly given his intellectual approach to racing, Dr. Alleva has published research papers in immunology journals over his professional career.

“My distance swim coach at Indiana University, James Kegley, convinced that it would be worthwhile, as he had been swimming these marathons for a few years prior to my start.” It was quite a flotilla of marathon swimmers at Indiana where he trained under fellow International Marathon Swimming Hall of Fame inductees Coach James “Doc” Counsilman and James Kegley between 1982 and 1986. The doctor’s hard-working nature enabled success to come his way among the professionals.

He balanced being on top of his game in the professional marathon swimming world for as long as he could as he entered the scientific world, but the demands become overwhelming. “My career as a scientist was too demanding with Ph.D. graduate school, postdoc fellowship, and then onto drug development in biotech sector.”

But the allure of the open water is drawing him back now. “I am director of an immunology unit in a biotech company and I swim occasionally on a master’s swim team – I’m trying to get back into long distance swimming.”