Where Are They Now? Djan Madruga 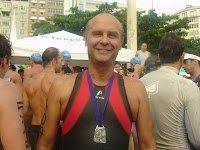 Where Are They Now? Djan Madruga

He finished second in the 2 km Challenge as he charged up the beach like the former Olympic medalist he was. “Swimming is my life.”

“After the 1976, 1980 and 1984 Olympics, I did some triathlons and the Ironman and kept doing masters swimming to stay in shape and have fun. I do a lot of open water swims and have done masters swimming since 1990 [winning the 400- and 800-meter freestyle and the 200- and 400-meter IM’s at the Perth Masters World Championships]. I try to get in 4K four times per week.”

After racing around the proposed Olympic 10K Marathon Swim course of the 2016 Rio Olympics, Djan showed his patriotic sense of pride in his home country. “I helped with the Olympic bid preparation and the Olympics will be another revolution for Brazil. Everyone is excited and is talking about the Olympics here. When the Portuguese came to Brazil, the country experienced major changes. This Olympics will be our second major revolution. The changes will be major.”

As Djan gazed over the scenic seaside course, partly protected by a peninsula and partly exposed to the ocean swells and currents of the Pacific, he said, “Look at this. We’ll have the marathon swim here and the triathlon here and the marathon run will pass by.”

As owner of his own swim club, the Djan Madruga Swim Club, he truly has never left the sport and will continue giving back – both in the pool and open water.