Where Looks May Be Deceiving 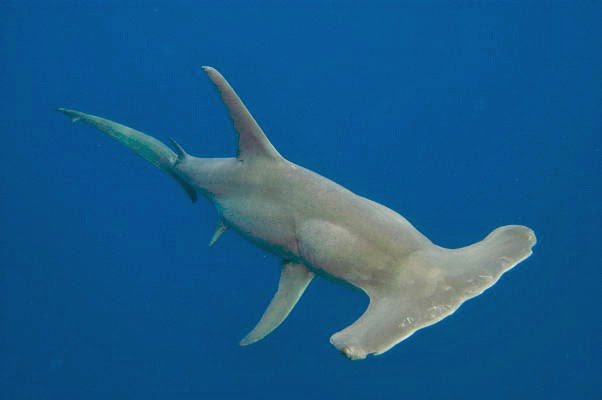 Steven Munatones recalled swimming with sharks, “When I saw one of these hammerhead sharks beneath me, it was spooky. When I saw two more hammerheads, it was getting downright scary. But when several dozens came around swimming silently, slowly, and gracefully beneath us in a circumnavigation swim around Yonaguni Island in Okinawa, Japan, I admitted that I did not want to keep looking down at the depths anymore.

The hammerheads looked pretty gnarly to me. Even if the sharks swum around me for less than 10 minutes throughout my 7 hour 8 minute circumnavigation swim, their presence was enough to worry me throughout the swim.

But I remembered what experienced shark divers told me.

Fortunately, I was told that the 9 different species of hammerhead sharks have disproportionately small mouths and reportedly do a lot of bottom-hunting – as opposed to man-hunting of ocean swimmers. The hammerheads are also known to form schools during the day, sometimes in groups in the hundreds. It was those groups that I had the thrill to have personally see during the swim around the tropical Yonaguni Island.”

While the hammerhead has an usual shape and is occasionally reported by the media as a feared apex predator, according to the authoritative International Shark Attack File, the hammerhead shark has been attributed with a total of 41 recorded attacks since 1580 with no deaths reported. There have been 17 unprovoked attacks + 11 provoked attacks + 6 non-assigned + 7 boat attacks.

For those who wish to know more, the International Shark Attack File has an plethora of information on sharks and what swimmers can and should do in the open water.