Where Risks Exist In The Open Water 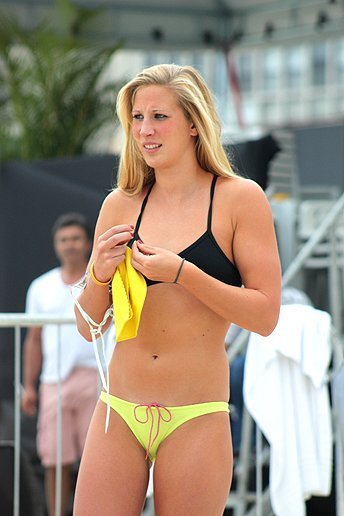 “As my mom stood on the beach at 2010 USA Swimming National Open Water Championships in Long Beach, California, she became increasingly worried. Her mouth became increasingly dry and her head pounded. Her initial maternal concerns were turning into real fears.”

Almost all competitors had finished the race, yet Ashley Twichell was nowhere in sight. Her mother found one of her teammates and asked nervously, “Have you seen Ashley? Did you see her during the race?” She responded nervously, “She passed me around the 5K mark. She was swimming at a slower pace than I expected.”

That report was not good. It effectively and immediately transformed fear into terror.

Twichell remembers the scene, “Frantically, mom ran up and down the sandy beach searching for me. She could only think of worse-case scenarios as her eyes welled up in tears. Suddenly, I popped into my mother’s peripheral vision.

She spotted me with my Duke University swim cap on, approximately 100 meters from the finish
.”

With her heart beating uncontrollably but with the widest smile possible, her mother watched as Twichell struggled towards the chute with an uncharacteristically lethargic-looking stroke. It was quite the polar opposite of her usual quick tempo. “As I finally reached shore, I shakily stood up. My mom and teammate came to meet me as I incoherently attempted to tell them about the race. My mom instinctively knew it was crucial to get me warm, and put some food and drink into me.

After I got dried and had time to collect myself, we went to lunch and I slowly began to get my bearings back. However, to this day, I do not remember the second half of that 10K race. In fact, later that day, I asked my mom what had happened to the timing chips that had been on my wrists; she informed me they had been cut off at the conclusion of the race. Somehow, my mind had effectively erased what I put my body through
.

The story is telling. While Twichell’s case may be extreme, it is non rare. Things happen in the open water. Her experience in the apparently calm waters of Long Beach is an example of how risk-inherent the sport of open water swimming can be if the proper precautions and a deep understanding of the conditions and one’s limitations are not taken into consideration. Twichell reflects on the scare, “Although I had been in the open water before, this was my first competitive open water swim. I essentially went into it clueless. I had never swam in water that cold (61°F). I had never swam for 2 hours non-stop. And, perhaps my most fatal mistake, I did not feed once. The feeding oversight could have been easily prevented. I never took the gel packs that were in my suit, and I did not have a feeder on the feeding platform. This was a disastrous move on my part.“

But even more so than the feeding was the lack of preparation of the water conditions. “I should have done at least some cold water acclimation prior to the race. It also would have been extremely beneficial to have done multiple long practice swims, – especially in a body of open water – to get a feel for how I would respond both physically and mentally.

I have to admit: my first competitive open water race was almost my last. However, that should never have been the case. In my opinion, talking to experienced open water swimmers is the best way to go about educating yourself ahead of time. They can provide you with personal experiences, vital tips, and helpful hints.

Even if you are a seasoned open water swimmer, research should still be done before taking part in any race. Be aware of important information pertaining to the particular race, such as water temperate, currents, tides, sea creatures, length, and number of people participating. Unpredictability is inherent for open water swimming; however, limiting the number of unknown variables will not only ensure safety, but also strongly enhance your performance
.”