Where Rough And Cold Meet Sharks And Currents 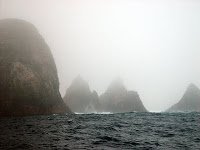 Where Rough And Cold Meet Sharks And Currents

Marathon and channel swimmers know the feeling of the day before a major swim: the excitement and the nervousness, the wonder and the stress. How is the weather going to be? How will you feel? How cold will the water be? How rough will it be?

The unknowns are plentiful and the unexpected is to be expected.

If you are preparing for a cold-water relay swim in Great White Shark-infested waters from the Farallones Islands (see above) to San Francisco Bay, what kind of pre-swim information would be expect from your team captain?

Here are examples of the precise information that the Night Train Swimmers received:

“…be prepared…this could be a cold and miserable night at the Farallones Islands….wind could blow all night…boat could rock even though we are anchored…bring the warmest sleeping bag you have…the journey out could be cold and bumpy…dress as warm as you can…might even wear a wetsuit going out…”

On the more positive side, the advice included:

“…once it’s over we will have accomplished something very very special…the wind will blow over your left rear behind you as we swim…waves are following us all ideal…[for] each stroke, it gets warmer…almost 51°F at Farallones Island and almost 56°F at the Golden Gate Bridge.”