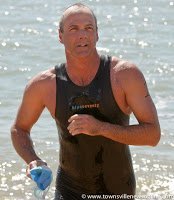 44-year-old Christie Leet from Whitsunday, Australia leads a busy life as the Principal at PRDnationwide Whitsunday with 4 children and triathlons, marathon runs and 4 Magnetic Island to Townsville (Australia) Swims under his belt. He has also done a Rottnest Channel Swim duo and a 15 km solo from Whitehaven to Hamilton Island.

And his life is about to get busier.

His latest plan is an unprecedented swim this coming weekend, 16 km from South Molle Island to Airlie Beach. “We will start from Roma Point, the southern most point of South Molle, heading in a north westerly direction up the Molle Channel, around Pioneer Point, and then heading west into Airlie Beach,” explained his swim partner Chris Palfrey.

“The main challenge with this swim is the currents which run at 3 knots or more.” Christie’s experience will come in handy to correctly calculate the water movement, enabling the pair to swim with the currents and not against them. “The Whitsundays is a world-class boating destination and I would love to see more long-distance ocean swims here. The attraction is that with Chris’s profile, we may gain interest in ocean swimming in the Whitsundays and create a major marathon swimming event.”

The Whitsundays have about 100 islands and islets, from Bowen in the north to Mackay in the south, including the well-known Hayman and Hamilton Islands. “To the best of our knowledge, this is the first time that anyone will have swum between one of the islands and the mainland. If all goes well with this swim, there will be many more challenges awaiting us and other open water swimmers.”