Who Will Be The King And Queen Of The Sea In Rio de Janeiro? 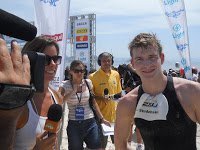 The highly successful King and Queen of the Sea Challenge (Circuito Light Rei e Rainha Do Mar Desafio in Portuguese) is lining up some blazing fast mermans and mermaids for the annual competition televised by TV Globo.

Part of a popular series in Brazil, the King and Queen of the Sea Challenge is a pro race that pits many of the top athletes together in a nationally televised extravaganza on the 2016 Olympic 10K Marathon Swim course on Copacabana Beach.

Trent Grimsey of Australia (the 2009 winner), Thomas Lurz of Germany, Alexander Studzinski of Germany (the 2010 winner), Valerio Cleri of Italy, Chad Ho of South Africa, and Diogo Villarinho, Glauco Rangel, Matheus Evangelista and Allan do Carmo of Brazil will be competing for the King of the Sea title.

Ana Marcela Cunha of Brazil, Giorgia Consiglio of Italy, Christine Jennings (2010 winner, see below) and Ashley Twichell of the USA, and Betina Lorscheitter and Gabriela Rocha of Brazil will be competing for the Queen of the Sea title on national television.